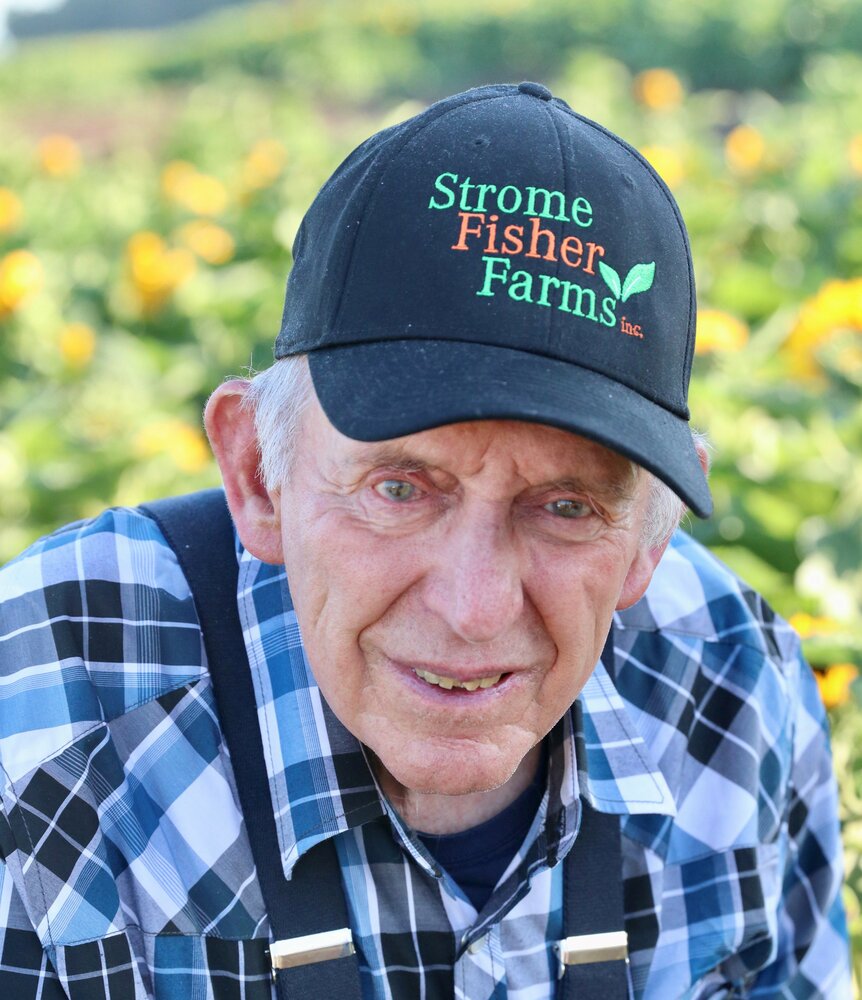 Donald William Fisher, a long-time resident of Junction City, Oregon died on Saturday, November 19, 2022 at the age of 91.  He was born in Silverton, Oregon on July 6, 1931 to William and Dorothy (Whitson) Fisher.  He graduated from Junction City High School in 1949 and went on to earn a Bachelor of Science in Agriculture (from then Oregon Agricultural College), now known as Oregon State University, in 1953.  After college Donald enlisted in the United States Marine Corp, and attended Officers Candidate School in Quantico, Virginia.  He was then stationed in Osaka, Japan.  He was promoted to 1st Lieutenant before leaving the Marine Corp in 1955.  He joined the Marine Reserves, for several years, becoming a Captain.

Donald is survived by his loving wife Mary (Freeman) Fisher, they were married February 3, 1962, and celebrated 60 years of marriage earlier in 2022.  Donald and Mary had one son, Ben.

In 1970, Strome-Fisher Farm, Inc. was created with Don, his wife Mary, and Carey and Gayle Strome.  The farm has raised many different crops including Perennial Ryegrass, Tall Fescues, Bent Grass, Coriander, Sugar Beets, and Radishes for seed.  The farm also currently raises Red Wheat and Teff for Camas Mills.  Strome-Fisher Farms grows mainly proprietary contracted varieties of both grass seed and specialty crops.  Donald was a hard-working and responsible farmer.  He was always willing to try new things, and unselfishly shared any knowledge he gained with others.

He also served on many committees and took on leadership roles with the OSU Seed Laboratory Advisory Committee, and was a member of the Board of Directors with the Tee2Green Corporation, and the Manhattan Ryegrass Association.  He is a past member of the Fescue Commission, past chairman of the North Lane Soil and Water Conservation District.  Donald has been involved with the Junction City Water Control District Board for 31 years.  He also served on the Junction City School District Budget Committee for several years.

Donald was awarded the Seedsman of the Year, 1992 from the Oregon Seed Council; the Voice of Oregon /Grass Seed Industry 2000 from the Agri-Business Council of Oregon; and was honored as a member of the Oregon State University, College of Agriculture, Diamond Pioneer Agricultural Achievement Registry, 2008.

A memorial service is planned for Friday, December 2nd, at 10:30 a.m. at St. Helen's Catholic Church in Junction City, Oregon. In lieu of flowers donations can be made to the OSU Foundation or Junction City Education Together.

To send flowers to the family or plant a tree in memory of Donald Fisher, please visit Tribute Store