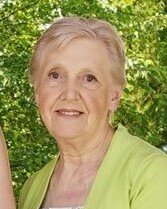 A service will be held Saturday, November 19 at 1:00 p.m. at West Lawn Funeral Home for Rosecella Florence Hooker of Eugene who died September 27 from complications related to Alzheimer’s disease.
Rose was born on October 18, 1935, in Watertown, South Dakota to Raymond William and Florence Lillian Schaaf. She was followed by two brothers, Robert Ray and Richard Lee. The family moved to Eugene, Oregon in 1951.
She met Clifton Leroy Hooker at Eugene High School and they were married in 1956. They had two sons, Mark and Dennis of Eugene; and two daughters, Shelly Trent of Eugene and Sherri Winterstein of Portland. A son, Douglas, died in infancy.
She enjoyed a long career with the phone company having held many positions before retiring. She also spent many years as a member of the Moose Lodge and enjoyed many hobbies including painting ceramics, baking, homemaking, yard work, going to garage sales, doing word searches, walking, and spending time with her family.
Rose is survived by three children, six grandchildren, two great-grandchildren, and her brother, Richard. Her son, Mark, died in 2018 and her grandson, Michael, left us in 2021.
Arrangements made by Musgrove Funeral Home.