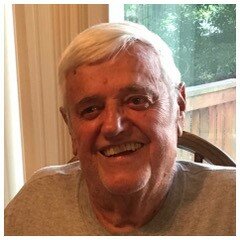 Jim was born in Manville, Wyoming, on August 19, 1933, at his mother’s home. His father, Jim Bridge,
died three months before he was born due to complications of serving in WWI. His mother, Anna Bridge, was left to raise him and his two sisters during the depression. Jim grew up playing near “The Peak” and moved to Lusk, Wyoming, when he was twelve years old and helped pay his mother’s first rent payment with the money earned driving a tractor. His “grit” started at a young age.
Jim played all sports through high school and went to the University of Wyoming on a football scholarship. He interrupted his college education and enlisted with the Army during the Korean War where he became a medic. After two years, he returned to Wyoming where he finished college and earned a bachelor’s degree in education. During the summers, between college years, he rough necked all over Wyoming. He went on to teach at Laramie High School where he coached football, wrestling and swimming. He went back to U of W, during future summers and earned his master’s in parks and recreation with a science focus.
He met the love of his life, Molly Riedesel Bridge, in 1959. They married and had two, wonderful daughters and lived in Laramie until 1965. They left Wyoming and moved to Corvallis, Oregon, where Jim began his career in the insurance business. The family size increased when they had two, beloved sons. They moved to Eugene, in 1972, where Jim bought his life insurance business. Jim resided in Eugene until he passed away on September 7, 2022.
Jim never knew a stranger and he loved to tell stories. He’d meet people in the store, at rest areas or out hunting and camping. He had some amazing tales to tell. If you knew him, you probably have a favorite of his.
Jim was preceded in death by his son Jim T. Bridge on 01.07.90 and Peter Bridge on 07.31.2010. He is survived by his wife Molly, his daughters Annie Bridge Tabshy and Amy Bridge-Cate, grandchildren, Stefanie Corley, Joe Corley, Susie Corley, Taylor Carlstrom, Dylan Carlstrom, great-grandchildren Christopher Luarca, Yasmine Flemming, Millie Willingham, Mitchell Crooms, Maliyah Crooms, and nephew Terry Rood.