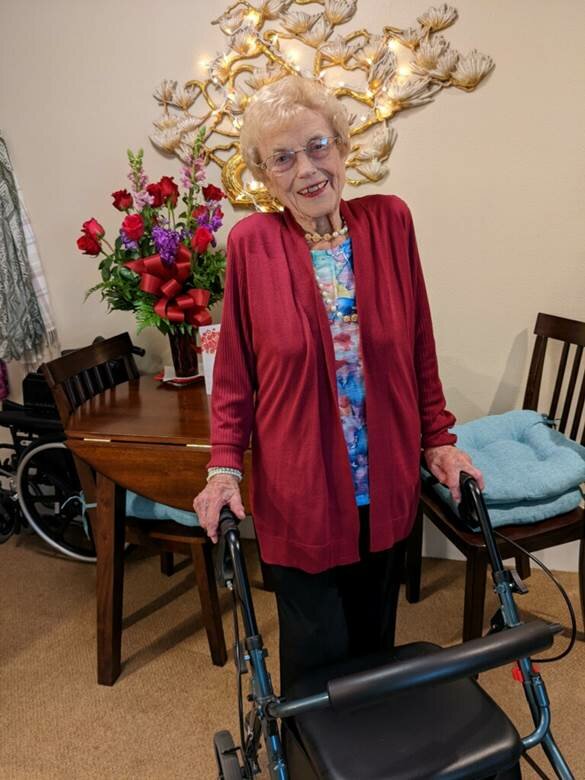 Marian was born in Goldendale, WA, the last of 8 siblings, on a ranch in the Columbia Gorge. She graduated from Malin High School, moving there to help relatives on a potato farm during the depression. After the war, she met and later married Pete Beach on her birthday, May 13, 1946 in Reno, Nevada. They went on to have 3 children, Linda Hoover, Rod Beach and Diana Mills. Marian worked in Real Estate for 3 years, but wanting to leave the stressful hours behind, she enrolled at the local business school in Eugene, Oregon, and became a secretary for Howard Cooper, heavy equipment sales. She worked there for 10 years, during which time Marian became a member of the National Secretary Association. With this career Marian had built for herself, she was eventually able to purchase a new manufactured home to place on her property on the outskirts of town. But that was just the beginning of her adventures, as she became quite the world traveler, visiting Hawaii multiple times, as well as England, Australia, and major city destinations throughout the United States. Still, Marian’s house was always “home” to all, and the door forever open to close friends and family. Christmas, Thanksgiving, and just family “meet-ups” were always warm and welcoming, as her family eventually grew to include 7 grandchildren, and later adding 9 great-grandchildren.

Marian Passed away at the graceful age of 95, at Spring Valley Assisted Living facility on August 18th, 2022. Diana, her youngest daughter, was always there for all the last precious moments, and gave her comfort in her final days. Marian passed away amongst family, and the wonderful and generous staff of Spring Valley. She will be missed by all, especially those who knew her best.

There will be a graveside service held in her honor, on Saturday, September 17th at 1pm, at the Springfield Memorial Gardens and Funeral Home, located at 7305 Main Street, Springfield, OR 97478. The family encourages anyone who knew Marian to come and pay their respects, and join the family in celebration of a life well-lived after the service.