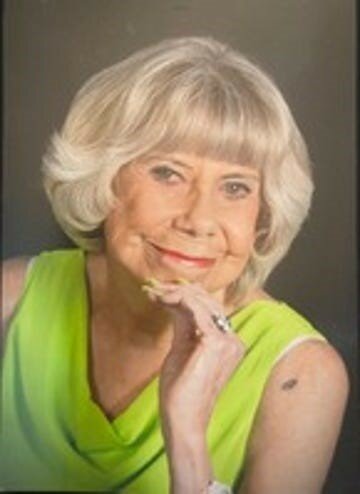 When Mamie entered a room, with her smile, outfit, high heels, fresh hair-do, and her positive attitude, the whole room would perk up with the energy she brought.

Mamie Alys Blessington was born on April 8, 1926 in Longview, Washington. She was the only child of Patrick and Gladys Blessington. Her father was a Titanic survivor. Mamie grew up in Longview, attending RA Long HS and Lower Columbia JC where she was selected Queen of Cowlitz County during the local fair.

Mamie married Thomas L McVicker in 1948. After moving around the Northwest, the couple settled in Corvallis and both worked for a women’s retail clothing store. Their employer also owned a store in Lebanon and Mamie and Tom purchased that store in 1957 and the family moved to Lebanon. The store name was changed to McVicker’s Casual Corner and Mamie excelled as the buyer for women’s apparel, establishing trends in local fashion. In Lebanon, Mamie was an active member of St. Edward Catholic Church and raised her three children in the Catholic church. When Mamie and Tom divorced, Mamie was forced to liquidate the store. To make ends meet, Mamie worked two jobs in two cities, while she raised her kids on her own. Everything Mamie did, she did for her kids. The family moved to Eugene in 1968, when her commute became too much.

Mamie started several businesses in Eugene during this time and transitioned into the jewelry business. When she discovered the wholesale end of the business, she found her stride. At one time, she covered 10 states, traveling by car, selling wholesale to retail jewelry stores. Mamie was a dynamo, and selling is what she did. Mamie was always selling, and she would tell you with a smile and a wink, that she was the best.

In 1993, Mamie married the love of her life, John Arnold. John was her biggest fan, and the two of them were an unstoppable force. Mamie would make appointments and sell, while John drove, carried bags, wrote the orders, and allowed Mamie to do her thing. They made lifelong friends with their clients wherever they traveled. Their relationship was the envy of all marriages; the Two were truly One.

At 86 years old, Mamie retired from road sales to pursue charitable opportunities in her Eugene community. Always selling, Mamie would hustle for donations for her yearly coat drive for Catholic Community Services. Mamie financially supported many charitable organizations while also supporting with her time and her talent.

Pat and Gladys raised Mamie in the Catholic Church and her faith defined her throughout her life. When she retired, with much happiness, she attended Mass daily. Mamie believed in the effectiveness of prayer and was in constant prayer for her family, her church, or anyone with a need. Mamie had a knack for meeting people, and after a short conversation she would invite them to attend church with her, and many times they took her up on the offer. Our loss is heavens gain, Mamie was one of a kind.

A funeral Mass will be held on August 18, at 11:00am at St. Jude Catholic Church with reception to follow. Per Mamie’s wishes, a barrel will be available at the service for school supply donations.

To send flowers to the family or plant a tree in memory of Mamie Arnold, please visit Tribute Store