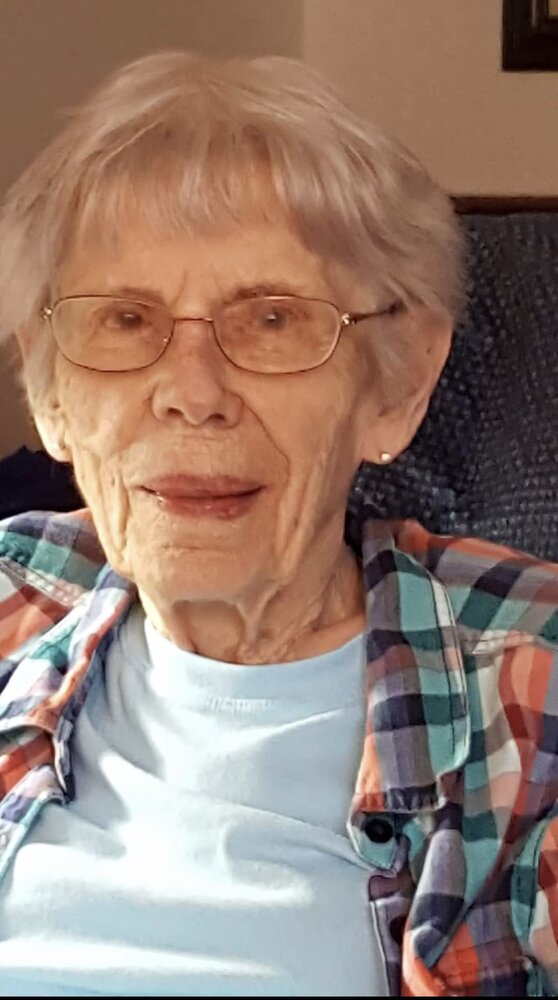 Neva was born on September 17, 1924, at the Madison Hospital in Madison, South Dakota. She was the youngest of 7 children, born to Nels Nelson and Agnes Johnson Nelson.  Neva’s mother, Agnes died when Neva was just 7 weeks old.  She went to live with her maternal grandparents, Gertie and Charley  Johnson.  She lived with them and her aunt, uncles and some other cousins until she was school age.  At age 6, she lived with her Dad, brothers and sisters on the family farm.
She went to school at Rutland School, Rutland, South Dakota, and helped at home with farm chores.  She was baptized and confirmed in the Lutheran faith at Lake Madison Lutheran Church. The church was founded and built by her Nelson and Johnson great-grandparents. When Neva was 15 years old, her Dad died. She lived with her sister Gladys and Gladys’ family for a short time.  She then went to stay with her Aunt Clara Benzel in Veblen, South Dakota.  She and her cousin Mina, boarded in Veblen during the school year and went to the Benzel’s farm on weekends. She graduated from Veblen High School in May of 1942. In high school she met the love of her life, Gerald Twite. After high school she attended beauty school in Sioux Falls, SD.
Gerald and Neva were married January 27, 1946, after Gerald returned from World War II.  She remembered it was a cold, cold January day.  They were married in the pastor’s home in Veblen. Neva had started a beauty shop in Veblen, and Gerald and Neva lived in an apartment above the shop.  On February 13, 1948, they became parents for the first time when Dennis was born. Neva became a full-time mother, wife and homemaker. Gerald was drafted into the US Army to fight in the Korean war and Neva and Dennis spent that time in Oakridge, Oregon with family.  When Gerald returned, the family reunited in Veblen, where David and Jerrilyn were born. In 1958, the family moved to Aberdeen, South Dakota. Sherri and Cyndi were born in Aberdeen.
In 1960, Neva and Gerald moved to Eugene, Oregon, and in 1961 settled into a home on Royal Ave.  Gerald told Neva, they wouldn’t live in that house forever.  They moved in 2003 – 42 years later.
Neva was a full-time mother, raising five children. Once all the children were in school, she went to work. She was a housekeeper at Good Samaritan Center.  Then she worked as a cook in the Bethel School District, primarily at Willamette High School, and then a teacher aide at Fairfield School.
Neva was a long-time member of the Sonja Lodge, Sons of Norway, where she learned Hardanger embroidery. She enjoyed working at Lutekfisk dinners and helping serve in many other ways.  She instilled in her children and grandchildren, the love and artistry of making lefse and krumkake. She enjoyed spending time with her children and great children on family camping trips and loved taking trips to the beach. She was a long-time member of Bethesda Lutheran Church and participated in women’s bible study and Bethel Clothes closet.  She mastered the art of baking bread, cinnamon rolls and pies.  She canned many, many jars of pears and applesauce. Lots of rhubarb and strawberries and frozen corn. She loved her vegetable and flower garden, especially her roses and dahlias.
She was preceded in death by her husband, Gerald, son Dennis, sisters Gladys Skyberg and Marlys Johnson, brothers Milo and Lloyd Nelson, and twin sisters that died in infancy. She is survived by son David (Jane), daughters Jerrilyn, Sherri (Larry) and Cyndi, six grandchildren, nine great grand children and three great-great grandchildren and many nieces and nephews.