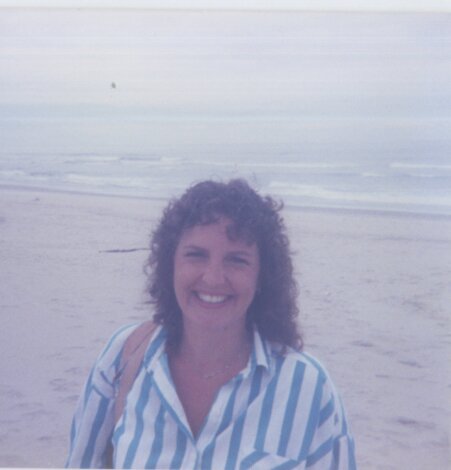 Teresa, a beloved mother, wife, daughter, sister, aunt and niece has passed away peacefully at home in the presence of her husband Tim. Setting an example for us, she demonstrated extraordinary courage, it would be difficult to overstate how greatly missed this member of our family will be. It was 1953, she was a young catholic family's first born, as was common at the time, her childhood was steeped in the dual notions of marriage and motherhood. Teresa became a hardworking, creative and caring sister to the five siblings that swiftly followed. In a home where emotional and financial circumstances were regularly challenging, Teresa developed a character evidenced by independence, bravery and an affinity for making friends, coupled with the realization that if you wanted to do or acquire something, make it happen yourself. Not unlike many female youngsters at that time she performed babysitting, friends and neighbors knew she was competent and experienced. Too, on summer mornings she caught local grower's strawberry and bean picking buses, thus earning pocket money. Those early 1960's were different times. Within two years of graduating high school Teresa entered marriage and soon went to work with the Oregon State Scholarship Commission. Working with the Commission only enhanced her appreciation for the value of interpersonal connections with her "customers" both inside and outside the Agency. With a long held desire to advance her education, she separated from State employment and became an adult learner at the University of Oregon, graduating with a

degree in public policy, planning and management. Subsequently, Teresa re-entered the public sphere, first with the City of Coburg and then with the Eugene Water and Electric Board. Possessing an observant presence and an interest in other people's lives, her successes at the Board were grounded in the power that came from facilitating associations with others. She loved to network with her generation, energy transmission and power trading peer group, saying "it is essential that work is fun as well as productive". Outside her working career, Teresa took pleasure in camping and picnicking with family and friends, walking along the upper Willamette Middle Fork Trail and visiting high lakes in the Diamond Peak Wilderness with her dogs and husband. On one occasion, while picking huckleberries, her husband disturbed a black bear which sped off through the berry patch in Teresa's direction. Her eyes got pretty big as the animal charged past within a few feet of her. Too, she delighted in countless cabin trips to Yachats. Preferring Lowa, she wore out more than one pair of hiking boots. Those were some of the best times. bride's maid dresses as well as wedding gowns for lucky family members. In retirement, she had more time to enjoy the cooking shows found on the Food Channel and OPB. There were often recipe ingredients to shop for and kitchen experimentation efforts that yielded new skills and favorite dishes. Teresa was predeceased by her parents Otto and Dorothy, sister Mary and brother Steven. She is survived by husband Tim, sons Eric and Barry, sisters Ann and Amy, brother Greg and many nieces and nephews. In our hearts she will live on in the kindness, comfort and love that was brought into our lives. To the world she was a mother, to her family she was the world.