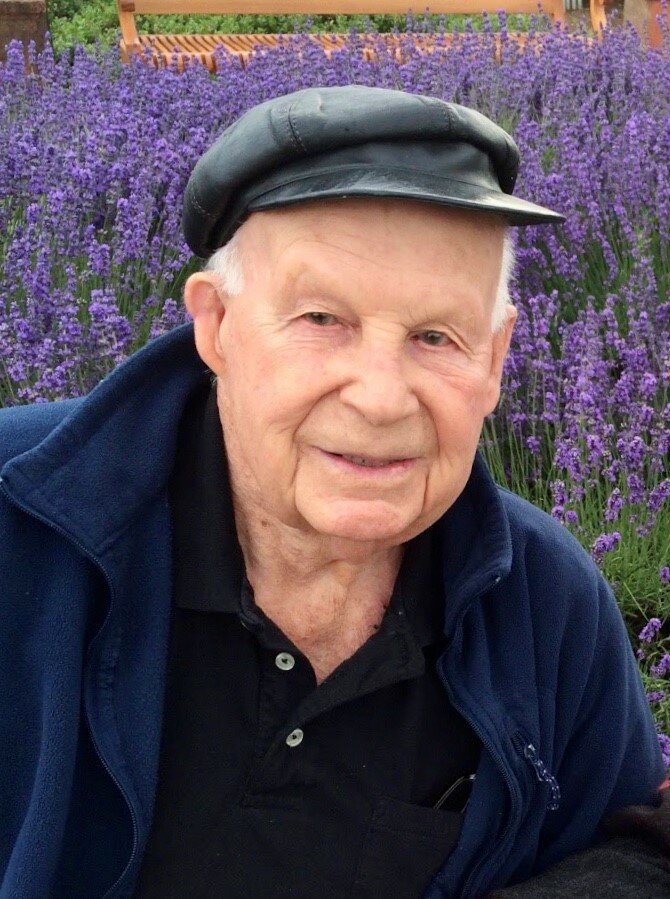 Vernon Guy Perdue, passed away peacefully on July 20, 2022, in Eugene/Springfield, Oregon, at the age of 96.  He was born to Mable Vernon Carson and John Guy Perdue in Butte Montana, on July 30, 1925, the oldest of two children.  He is survived by his six children, six grandchildren, and eight great grandchildren.  He is preceded in death by his wife, sister, and grandson.

He graduated from Eugene High in 1943 and was shortly drafted into the Navy and served in the Pacific fleet as a gunner’s mate until 1946.  After the war, he married his high school sweetheart Mildred (Millie) LaNevine Anderson in 1946. He graduated from the University of Oregon 1950.  After college he landed a job with the US Government with the Inter-American Geodetic Survey (IAGS) where he had a long successful career working in various countries.

He began his career in 1951 at the geodetic training school in Panama, and soon moved to Colombia as part of a team running a geodetic level line between Cali and Cartagena, walking the entire round-trip distance of roughly 650 miles.  In 1953 he was transferred to Cuba where he spent five years surveying and collecting tide data in Cuba, Jamaica, and the Cayman Islands, as part of the US Army Corp of Engineers mapping project under way in the Americas.  Vernon was later hired by the Aero Service Corporation in Amman, Jordan, serving as project manager for a US government contract to map the Kingdom of Jordan.  While mapping in the desert of Jordan, he had the good fortune to come across the cast and crew filming the movie Lawrence of Arabia and shared a few beers with Peter O’Toole, Omar Sharif, and Anthony Quinn.  In 1964 he returned to South America as chief of geodesy for IAGS in Peru and in 1969 he moved to Ecuador as project engineer.  Due to his lengthy dedication and service to Ecuador, he was awarded the prestigious presidential Medal of Atahualpa, by Ecuadorian President Rodrigo Borja in 1992.

After he retired, he opened several artisan gelato ice cream stores in Quito, Ecuador.  Vernon loved the good life.  He loved sports, especially the Oregon Ducks. He loved golf, Cuban cigars, martinis, bullfights, music, and dancing to Latin rhythms.  He loved adventure, camping at the beach, exploring new places, fishing in the beautiful Andes, and soaking in the volcanic hot springs in Papayacta, Ecuador.  He enjoyed traveling, and in the 1970’s took his family on an unforgettable adventure, driving through Central America from Panama to Oregon, camping most of the way. Throughout his travels Vernon made many lifelong friends.

Vernon was very friendly, charming and had a good sense of humor and everyone loved him.  Vernon requested a quiet and peaceful farewell in lieu of a memorial service.  May we all raise a toast to Vernon Perdue, for the unique and special way he touched our lives. He was a loving father and good friend and will be greatly missed.