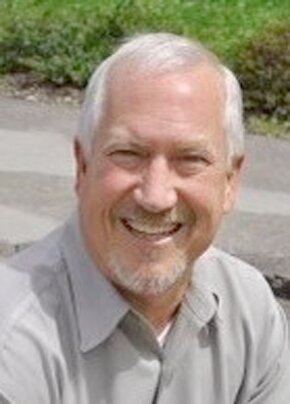 Joe was born and raised in Lebanon, Tennessee, the fourth child of Harry and Mary Lou Lannom Alsup. He was the baby of the family and a famous child-star in Varallo’s Chili TV commercials. He was predeceased by his brother Loyne, sister Jane and nephew Clayton. He is survived by his sister Julia, sister-in-law Karen and niece Alexis Alsup.

Joe graduated from Castle Heights Military Academy, in Lebanon, where he swam and marched to the beat of a different drum. He graduated from the University of Tennessee in 1975, with a degree in education and a minor in deaf ed. He taught science and coached the swim team at the Tennessee School for the Deaf in Knoxville.

While at UT he collected a cadre of close friends who would become his “chosen family.” In 1980, at the urging of these friends, he moved to Eugene, Oregon. He worked as an interpreter for the hearing impaired in the 4J school district. After receiving his Oregon teaching certificate he taught students with behavior challenges at Harris Elementary. His kids were the envy of the school when he helped them create and produce “Let’s Give ‘Em Something to Talk About”, a weekly news program of student interviews with local celebrities that aired on local television .

He received a Masters of Education at the University of Oregon and then served as Assistant Principal at South Eugene and Principal at Crest Drive Elementary (his pride and joy). He created a curriculum and set up a lab for students to study the ecology of the Long Tom River, whose headwaters are on the Crest schoolgrounds. He finished his career as Principal of Edison Elementary.

A travelling man, he made an annual trip home to Tennessee. He attended the Jazz Fest in New Orleans several times. During college, he spent a year in Australia and always wanted to return. Another highlight was a trip to Japan chaperoning a school group, where he enthusiastically embraced the Japanese culture.

Joe’s warmth and grace epitomized Southern hospitality. The Bishop’s hat was his favorite napkin fold; fried chicken his specialty. He was deeply insulted by any offers to help and sent everyone home with at least one heaping dinner plate of leftovers. He also believed he made the best turkey tetrazzini in the world (most people hoped fried chicken would be the entree). And he did win “Best Barbeque Sauce” at least twice at Eugene’s Juneteenth celebration.

He was a founding member of THE RICKIES, Eugene Celebration’s premiere prize-winning marching parade group. In an assemblage known for outrageous entries, he managed to make himself stand out-- sometimes to the consternation of other members. He carried the Olympic torch from Eugene to Junction City on its nationwide journey in 2002.

He had a million friends, was a proud gay man, loved the Ducks, liked to bicycle, ski, whitewater raft, and throw a good party. He loved his dog Chuck, his splendid garden and his cozy home. He served on the Eugene Police Commission and several non-profit boards.  He had a great, quirky sense of humor, contagious exuberance, was witty, charming, handsome, funny and stubborn as they come. We miss him.

Joe’s last years were spent in the extraordinary care of the staff at Elderhealth and Living in Springfield. In lieu of flowers, please consider a donation to CAHOOTS, through White Bird Clinic.

To send flowers to the family or plant a tree in memory of Joseph Alsup, please visit Tribute Store