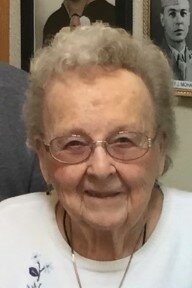 Miriam “Mimi” Lois Follett passed away on June 12, 2022 in Eugene, Oregon at the age of 98. She was born on December 18, 1923 in Tacoma, Washington to Anna Pedderson Jones and Merrill Jones. Miriam graduated from Lincoln High School in 1941 in Tacoma, Washington. She married John Follett Jr. on October 5, 1943 in Tacoma, Washington. John and Miriam enjoyed square dancing, and many years of activities with their trailer club. Miriam was an avid volunteer for service related organizations, which included the Red Cross.

A Memorial Service will be held on Thursday, July 7, at 11:00 a.m. at Bethesda Lutheran Church, 4445 Royal Ave, Eugene, Oregon. Arrangements entrusted to Lane Memorial Funeral Home. Please access the obituary and you are invited to sign the guestbook at musgroves.com.