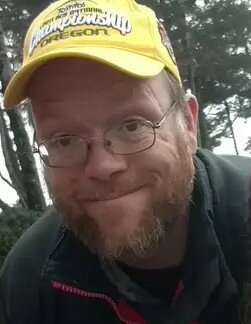 Terry Thomas Shimon was a beloved son, brother, uncle, and friend.  He suddenly departed from this world on May 27th, 2022 at the age of 47, in his hometown of Junction City, Oregon.

Terry was born to Darold and Wanda Shimon on January 16th, 1975 in the great state of Iowa.  During his childhood, his family moved to Oregon, where he chose to remain for the remainder of his life.

Throughout his life, Terry loved spending time in the great outdoors, specially if there was water nearby.  He loved camping, fishing, floating on the water, and watching the sunset on the Oregon coast.  When he wasn’t outside, he enjoyed spending time online with his gaming friends.  He was a pun-loving guy, and was known for being an animated storyteller & jokester.

Terry is survived by his mother, Wanda, his two sisters: Julie and Ginger.  He loved being an uncle to his many nieces & nephews.  He will be greatly missed by his family, co-workers, and dear friends.