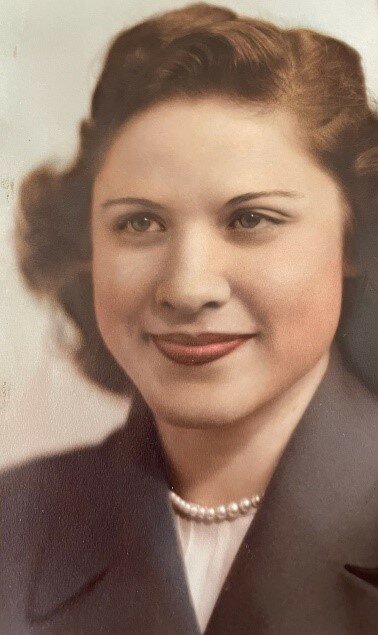 Irene Lucille (Mart) Rhoads, of Eugene, passed away into the arms of Jesus, on the morning of May 31st, 2022, at the age of 96. Irene was born on October 8th, 1925, in Lushton, York Co., Nebraska, to Glen and Hazel (Gibbins) Mart. Irene was the last surviving member of her family. Father, mother and 4 brothers preceding her in death. Darold, Denzel, Robert (Bob), and Raymond. The Mart family moved to Oregon in the early 40’s in what became known as “The Mart migration to Oregon.” She graduated from High School at age 16 in Nebraska before the trek out west. Irene found a job as a telephone operator here in Eugene. She attended Oregon State College and studied Home Economics.

Irene married Russell A. Rhoads on Sunday January 12, 1947. They were married for 69 years. Irene and Russ lived here in the Eugene area the rest of their lives and raised a family of 4 children in the 2 homes he built. Nancy (Ken) Boire, Nicholas (Melinda), Michael (Kathy), and Janet Wolfe. Irene excelled at being a wife, homemaker, and especially a mother. She loved her family and took great pride in caring for them by cooking fabulous food, sewing clothes and keeping a “ship shape” house. Irene had a deep faith in the Lord Jesus Christ. That faith sustained her through a traumatic brain tumor in 1970. She was able to live life to the fullest even with her disabilities. Irene and Russell enjoyed traveling during their retirement years. Making it back to Nebraska and South Dakota where they grew up.  After her husband Russell “RA” died, she lived at Churchill Estates for the last 6 years of her life. Irene is survived by her 4 children. 11 grandchildren, 12 great grandchildren. A private graveside service will be June 9th, 2022, at Lane Memorial Gardens.