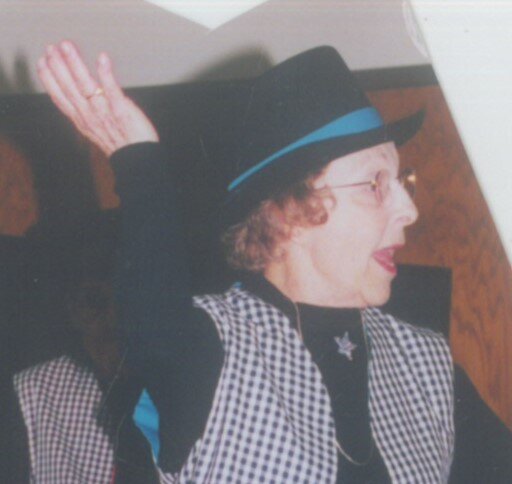 Helen was born in Klamath Falls, Oregon on August 24, 1923 to Mary Helmick Wiest and William Wiest, Sr. She lived most of her childhood in Portland, Oregon and then at Helmick House in Monmouth, Oregon. She graduated from Monmouth High School and then Oregon College of Education in Monmouth in 1944. She was student body president in 1943-44.
She taught lower elementary school in Clatskanie and Coos Bay in Oregon and in New Jersey and Delaware. She finished up her public school teaching career in the Bethel School District in Eugene. Later in her life, she had a preschool in her church, in Eugene, St. Mark Catholic Church. She loved working with children Helen married Clarence Kern of New Jersey in 1946. He passed away in 1965. She married Robert Dow Riddell in 1967. He is also deceased as are her three siblings; Marie Daniels, William Wiest Jr. and Marion Brisbane.
Helen's children are Anne Kern (Jim Craft), Tomi Ray and Robert Riddell, Jr. She has four grandchildren; Sean Kern-Craft (Natasha Boykin), Kelly Kern-Craft, Kyle Jeffers (Serena) and Samantha Riddell. A stepson, Jeff Riddell is deceased. She has two great-grandsons; Kellen Boykin and Dylan Kern-Craft. She also has many nieces and nephews from the Kerns, Wiests, and Brisbanes.
She was a state appointed ombudsman for 8 years watching over nursing homes in the area. She was a member of St. Mark Catholic Church for more than 50 years. And she was a past member of the Carmelite Auxiliary and Church Women United. She enjoyed birding, was an Audubon member and went on a birding trip to Costa Rico as well as several trips in Oregon and other states. She traveled to ten countries and one of her favorite trips was on the Queen Mary transatlantic trip with her daughter, Anne.
Applause came late to Helen when she performed with the One Niters and Encore Theatre, both directed by her good and dear friend, Eliza RoaringSprings. She was a recent member of Readers Theatre. A highlight of those years was when she took tap dancing lessons at 80 years old!
Helen was aware and thankful for a lovely, fulfilling life. A gathering to celebrate her life will take place on Saturday, May 21 at Musgrove Mortuaries, 225 South Danebo Ave. Eugene Oregon (off West 11th) from 1 pm to 3 pm.
Arrangements entrusted to Musgrove Family Mortuary. Please access the obituary and you are invited to sign the guestbook at musgroves.com.