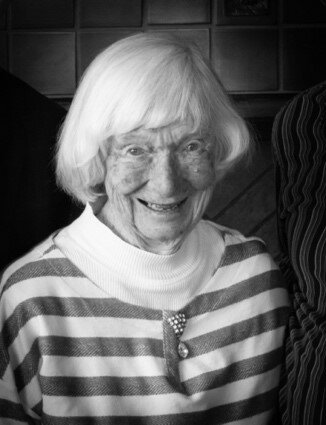 Wanda Truett passed peacefully in Eugene Oregon on April 11th at the age of 102. Wanda was born in Bend on May 4th, 1919 to Roy and Anna Boardman. She was the youngest of 5 children and born on a farm just  outside of Bend. She spent most of her life in Bend; attending Kenwood grade school and was a graduate of Bend High. After graduation, she moved to Portland with friends and joined the war effort. She worked for Columbia Aircraft and was truly “Rosie the Riveter” building tail sections for WWII aircraft.

Prior to the war, she met her future husband, John Truett, who was working for the Civilian Conservation  Corps. After the war, she returned to Bend and went to work for the police department. John and Wanda were married in November of 1947. Together they had two children, Rich and Mike.

Wanda also worked for the Bend Memorial Clinic. She retired from the clinic in 1985. After retirement, Wanda and her sister Laurene enjoyed spending time hiking and cross-country skiing. They were both in a local hiking club, and were active with the group into their early 90’s. They were also members of a cross country skiing group in Bend.

With her appreciation of the outdoors. She spent most of her time off taking her two son’s camping and sharing her passion for nature. It’s something she also shared with her grandchildren. Wanda’s family was her great joy.

Wanda was proceeded in death by brothers Floyd and Chuck, and her sisters Mabel and Laurene. She leaves behind her two sons, Michael and Richard Truett, 5 grandchildren, and 9 great grandchildren as well as her best friend Dorothy.

In lieu of flowers, donations can be made to the Humane Society of Central Oregon.

To send flowers to the family or plant a tree in memory of Wanda Truett, please visit Tribute Store