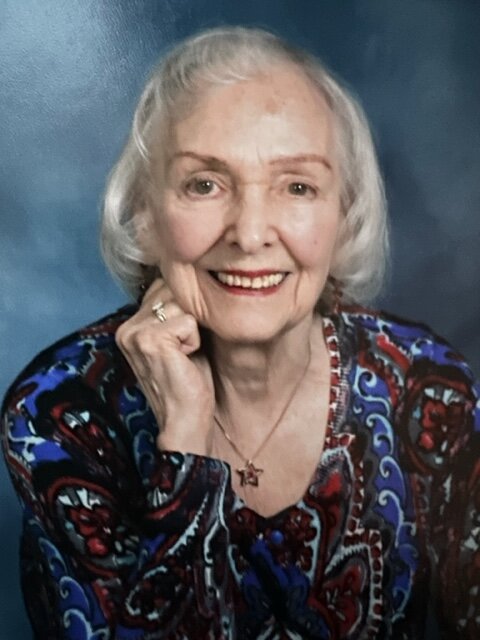 Mary-Elma always considered herself an Army brat. Born January 17, 1926 in Plattsburgh Barracks, New York to Colonel Thomas and Helen Allen, her early family life was defined by her father’s military career. She was the eldest of five, living in New York, Pennsylvania, Puerto Rico, Georgia and Hawaii. She enjoyed sharing stories about her favorite adventures, one being the family’s evacuation from Hawaii prior to the bombing of Pearl Harbor. Mary-Elma loved to tell about the voyage by ship through the Panama Canal, with many young soldiers to keep her 15 year old self company!

At the age of 16, she attended Westminster Choir College, where much of her education as a skilled and talented musician took place. It was during this time that she attended a USO dance at Princeton. Her favorite story is telling how the most handsome soldier at the event came and asked her to dance! When other men asked her to dance, he always cut in. And here began the rest of her story!

Charles F Shotts, Mary-Elma’s knight in shining armor for the rest of her life, dated her for several months, until he shipped out to Europe during WWII. At age 19, she completed her 3rd year of college with senior  credits. She traveled by herself on a train across the US from Harrisburg, PA to Gilchrist OR. There, Charles  and Mary-Elma were married in the backyard of his parents. They returned to the east coast where Charles  continued military duty. Then back to Oregon. After a couple of years in Corvallis where Charles attended  OSU, they returned to Gilchrist where they lived for 43 years.

While raising her five children, Mary-Elma stayed busy with her many interests and her community. Besides teaching piano lessons, she was the choir director, organist/pianist, and soloist for the Methodist Church in  Gilchrist for as long as she lived there. She also taught school in the LaPine public schools for a couple of  years. She volunteered at the Gilchrist school where all of her children attended. She was a talented  seamstress, performed the hula at events, and enjoyed her bellydancing classes and preparing nutritious  food. She sang in the Central Oregon Community Choir and traveled with the choir to perform in Europe.

With their children becoming more independent, Mary-Elma and Charles enjoyed US and international  travel. Upon Charles’ retirement from Gilchrist Timber Company, they moved to Eugene. With children  raised and educated, Mary-Elma enjoyed many organizations. She was active in Women’s Choral Society,  PEO, Republican Women, Symphony Guild, DAR, Music Teacher’s Association and the First United  Methodist Church choir and Women’s group. They joined the Eugene Country Club and Mary-Elma played  golf regularly until several years ago. She had a group of girlfriends with whom she played bridge. Covid put an end to most of her favorite activities, which was very hard on her. Thankfully, she had just moved to the  Springs at Greer Gardens prior to the Pandemic, where she lived independently in her own apartment. Mary-Elma was a gracious and generous lady. Always a force to be reckoned with, she brought lots of talent and energy to causes she supported. Eating right to stay healthy was one of her favorite causes, not only for herself but for everyone that she cared about.

Her love and support for her family was boundless! She is survived by her two sisters, Helen Vandersluis  and Ruthie Reubi, her five children, Marjorie Calhoun, Charlie Shotts, Carla Hoffman, Andy Shotts and Chris Shotts and their spouses, eleven grandchildren and sixteen great-grandchildren. We miss our dear Mary-Elma!
A memorial service will be held this Sunday, April 24, 2022 at 3:00 p.m. at the First United Methodist Church.
Donations can be made in Mary-Elma’s memory to the First United Methodist Church in Eugene.

To send flowers to the family or plant a tree in memory of Mary-Elma Shotts, please visit Tribute Store