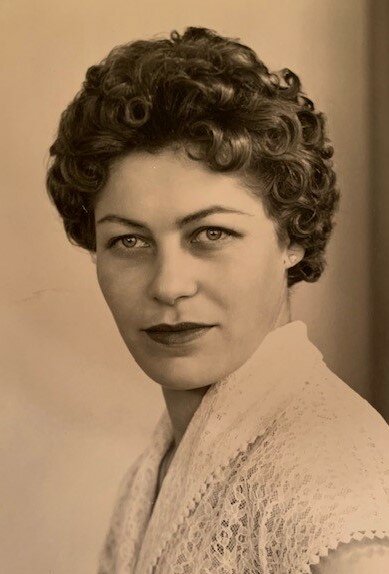 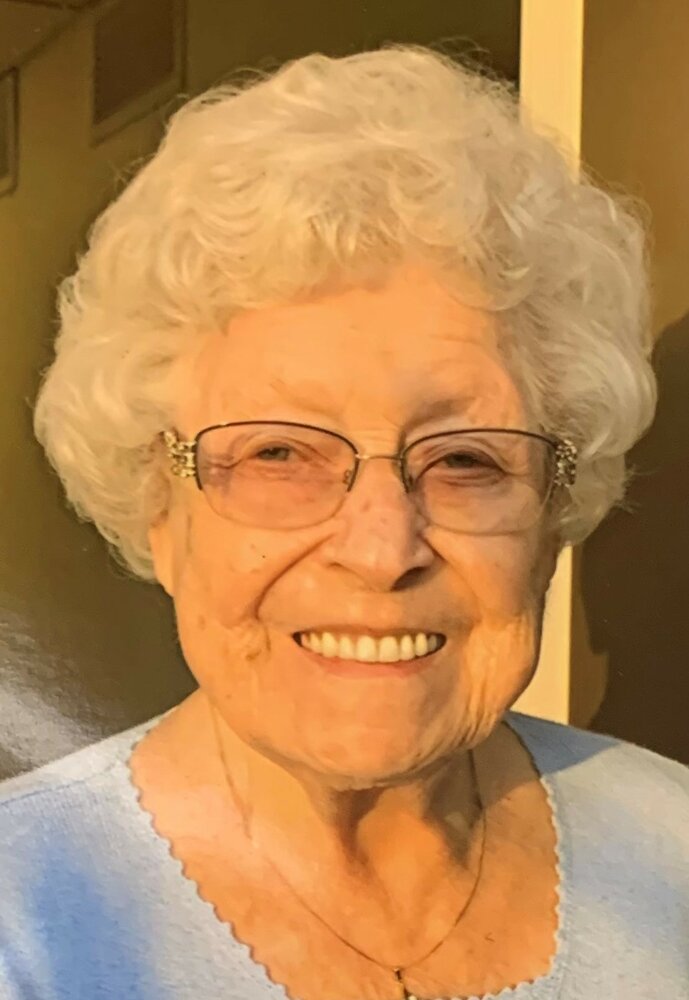 Elisabeth (Liesel) was born in Eiweiler, Germany on June 1, 1928.
She passed away on November 21, 2021 at the home of her granddaughter Stephanie Coats, while lovingly holding the hands of her two daughters, Ellen and Delia, who were with her every day and every night in her last few months on this earth.

We are eternally grateful that we were able to keep our loving Mami and Omi with us at Stephanie’s home to take special care of her with the help of our family and our two wonderful caregivers, Teresa and Sheila.  All of her grandchildren spent time visiting, facetiming, and calling her so she was never alone and always felt loved and cared for, which has always meant the world to her!  Her family has always been number one in her life and that never changed!

Elisabeth was the third of five children, born to Frieda and Paul Altmeier in Eiweiler.   Her siblings were Tony, Irmi, Franz-Josef, and Renate, all of whom she loved dearly and kept in her heart throughout her life, even though her family all stayed in her homeland of Germany and Liesel ventured to Canada, and then to the United States.

Elisabeth spent her youth in Eiweiler, Germany and also met her wonderful husband-to-be, Eugen Seifert there.  Their love was meant to be from the start!   They met when she was 22 years old and he was 26, at Frau Geidt’s “Wirtshaft” and “Bakerei” (restaurant and bakery), which was located right across the street from Liesel’s home.  Liesel was working at Frau Geidt’s restaurant when Eugen came in to hold a meeting for his magazine sales representatives one evening.  They found an interest in each other from that evening on, although they didn’t actually begin dating until later.   Somehow they always remained in each other’s thoughts and hearts throughout the next few years.

As a young woman, Liesel  worked for Herr Hirsch in his photography studio in Eiweiler, and did “everything” including cooking, cleaning, grocery shopping, assisting with photography, and helping schedule appointments, etc.  She worked there until January of 1957, when she received a letter from Eugen, who had since immigrated to Vancouver, Canada.  He stated that if she felt for him like he felt for her, she should come to Canada and marry him and they would make a life together there!  He sent her money to buy herself a wedding ring and that beautiful gold ring (engraved with their initials) remained on her finger for the rest of her life here on earth!  Their love was meant to be and has set an incredible standard for the rest of our family to follow!
Liesel flew to Canada on August 13, 1957;  married Eugen on August 24, 1957.  One year later on August 13, 1958, they welcomed their first beautiful daughter Ellen into their hearts and lives!  Liesel’s dream had always been to be a wife and a mother, even as a little girl growing up.  She loved to play with her dolls and even sewed clothes for them, pretending they were her children back then.  (That was good practice for when she sewed her own beautiful dresses and later her daughter’s matching outfits on a regular basis later in life!)  Once her little sister Renate was born, Liesel (at the age of 9) loved taking care of her.  She felt like Renate was “her baby” and was more than happy to do whatever needed to be done to help her parents take care of her, while they were working in the fields and otherwise occupied.  Her father Paul worked in the coal mines, so technically, Liesel was a “coal miner’s daughter”!  Her mother, Frieda was a hard-working woman who balanced taking care of her five children besides managing the household, the garden, the animals, and the fields.  Liesel has fond memories of spending lots of time with her “Godie” (her grandmother) who also helped tremendously in caring for the children and the household.  We have heard many fun stories about her over the years!

In 1960, Eugen and Liesel packed all of their belongings into their VW Bug and moved to Santa Monica, California.   They removed the front passenger seat and little two-year-old Ellen rode in a box where the seat should have been.  (Apparently seatbelt laws and car seats were not a “thing” back then!)  Two years later, on January 30, 1962 they welcomed their second daughter Delia into their family.  Their family was now complete!  (Other than their pets over the years;  a cat named Fritzy, a dachshund named Cosmo, and their two poodles, Pierre #1 and #2)

The big earthquake in 1971 caused the Seifert family to relocate to Eugene, Oregon with friends, the Bojarsky family for about six months.  Then they packed everything and moved to Germany, to join all of their relatives that had been left behind and planned to make a new beginning there, in their home country.  Eugen’s wanderlust changed that plan about a year later and they moved back to Oregon where they have lived happily ever since!  Eugen said it must be fate because the city had his name!  (Eugene)

Ellen and Delia both got married and each had three children, which filled Liesel and Eugen’s hearts with joy!  They felt very blessed to have six wonderful grandchildren!   They added a new grandchild every two years.  First came Emily, then Stephanie, followed by Alexander, then Kaila, followed by Megan, and finally,  Nikolaus!   All the grandchildren loved spending time at Omi and Opa’s house.  They all  have many fond memories of baking with Omi, playing in the sandbox outside, and swinging in the backyard with Opa.  They had a tradition of picking blackberries with Opa and then making the most delicious blackberry jam with Omi!  We still have the recipe and are keeping up this special family tradition.

Opa Eugen passed away before being able to meet his first great granddaughter, Luna, who was born on August 2, 2016, but Omi Liesel has enjoyed spending time with her every time she visits Oregon from her home in New York, to see her Oma Delia and Poppy.   Omi Liesel and Luna enjoyed a very special bond with one another.  On September 14, 2020, Allyson Rae, Omi’s second great granddaughter, was born to Alexander and Kyla.  They have spent precious times together and have also developed a very special bond.

Our family is very close and we have always celebrated birthdays and other holidays together in a very special way, due to our Mami and Daddy (Liesel and Eugen) who instilled in us the incredible value of love and FAMILY!  Some of our most recent family celebrations were Mami/Omi’s 90th birthday party which we celebrated with the help of a special guest who serenaded her:  ELVIS!   On her 93rd birthday, we surprised her with one of her granddaughters (Kaila, who flew in from Texas) jumping out of a large gift box to complete the party!  In the past, the Seifert parties always included music, dancing, and hilarious skits!  Liesel’s many talents included the ability to sing, to play the harmonica and the accordion, juggling, hula-hooping, ice-skating, and acting.  She received her first accordion at the age of ten, and taught herself to play!  Her musical talents were used throughout her life.  She played leading roles in plays and musicals, and also sang in her church choir in Germany.

With the influence of both our parents, our family really learned how to celebrate and have a good time together!  Eugen and Liesel were always the life of any party and made sure we all had a great time!  We intend to continue that tradition as well!  Liesel’s homemaking skills were always impeccable and she loved cooking wonderful meals on a daily basis, and also baking delicious cakes and cookies which we will always remember!  Our Mami and Omi had an uncanny skill with people and seemed to always know when something was wrong or bothering us.  We have spent many times sitting in her kitchen and having heart to heart talks, both with us, her daughters, and each of her grandchildren.  Her stories will always be imprinted on our hearts, because she loved sharing with us about her life and experiences!  Liesel was a shining light to all who met her.  When she lived at Sheldon Park during her last three years, EVERYONE loved her!   We always heard from the staff and other residents how wonderful and loving and funny she was!  She could make anyone and everyone smile!

Our Mami and Omi will be remembered in our hearts forever.  She was the most loving and caring person we ever could have asked for.  She ALWAYS put others first and took care of all of our needs no matter what.  Her strong faith has carried her through many ups and downs in life and she never wavered from her belief in God, especially in the very difficult last months of her life.  She set a shining example of selflessness and compassion for us all to follow.

Liesel lost her loving husband, Eugen after 59 years of marriage when he passed away on December 13, 2016.  She also lost her wonderful son-in-law, Arnold Coats (Ellen’s husband) on July 19, 2020, whom she had grown to love dearly over the many years they spent together.  Many years ago, Liesel also lost her parents, Frieda and Paul, and her siblings Tony, Irmi, and Franz-Josef.  She has now joined all of her loved ones who have passed before her in a joyful reunion in HEAVEN!  We know they are all celebrating together and looking forward to seeing the rest of the family when it is our time.

We are planning a service to celebrate Liesel’s life with family and friends at Living Hope Church on Saturday, May 14, 2022 at 1:00 pm.  (2801 West 18th Avenue in Eugene).  All who knew and loved her are invited to join us in this celebration.  We would like to extend our heartfelt appreciation to all of the wonderful, loving staff from Sheldon Park;  caregivers Teresa Gallegos and Sheila Knight;  Peacehealth hospice team, especially Ben, her wonderful hospice nurse; the caring staff at Musgrove Family Mortuary;  and ALL of our family and friends who filled her life with joy and love!