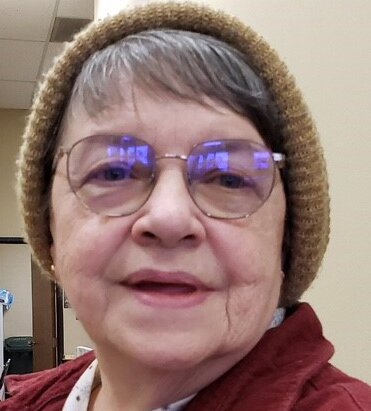 Cathryn Marie Leinbach Russell passed away peacefully at her home in Eugene, Oregon on March 8, 2022. She was 72 years old. Cathy was born in Portland, Oregon on November 23, 1949. She was a resident of Eugene since 1958 where she attended Edison Elementary and Roosevelt Jr. High. She graduated from South Eugene High School in 1968 but spent her Junior year at the Argenta Friends School in Argenta, British Columbia. She loved the remote, natural beauty of the area and always spoke fondly of her time there. While she was in Argenta, she learned to play guitar. She had loved to sing since she was a small child and sang in the school choir at South Eugene High.
Not long after graduation, Cathy heard from a friend that Don Savoie’s Coburg Inn was looking for a table singer – a “Wandering Troubadour”. She was shy and somewhat nervous when she first began but she eventually settled into the job and began learning more songs. She would go on to develop a repertoire of over 1500 songs, taking requests from diners and becoming more and more difficult to ‘stump’. She would sing everything from ‘old standards’ to popular songs of the day, from country-western to folk to classical to Broadway show tunes. She sang at the Coburg Inn for 13 years.
It was at the Coburg Inn that she met her husband of 20 years, Leon Bazalgette Russell of Nimrod, Oregon who was 30 years her senior. It was that “May-December” romance that took her away from entertaining. Leon and Cathy lived on the McKenzie River at “River Hill House” but they also maintained the house that she owned in Eugene. Cathy loved cats but also Leon’s dogs and so their Eugene home was their “Cat House”, while Leon’s home was the “Dog House”.
The couple also loved to travel and their excursions ranged from fine dining and lodging in Europe to camping on the Oregon Coast in their VW camper. When he met Cathy, Leon abhorred camping but Cathy’s extraordinary cooking skills – even over a campfire – convinced him of the pleasures of camping out doors. Their first camping trip, they ate lobster, baked potatoes, and asparagus all prepared over the open flames of their campfire.
Leon suffered a stroke in 1998 and passed away in 2002. Cathy cared for him at home following his stroke and was by his side when he died. She never remarried. She remained at her “Cat House” until her passing but maintained a home on the McKenzie River until 2018. Cathy’s mother, Esther Vashti Evans Leinbach passed away in 2006 and her father, Albert Douglas Leinbach, passed in 2010. She is survived by her brother, Kevin Leinbach of McKenzie Bridge. She had no children.
A memorial will be scheduled in the early Spring.

A memorial potluck and Celebration of Life will be held at Aqua Gardens Villa on August 27th from 2:00 p.m. to 5:00 p.m.  Guests are invited to bring a favorite dish and share stories of the Cathy that they remember.  For more information, please send an email to Kevin Leinbach at Kevin@coppertreehouse.com.

She suggested that donations be made in her name to Oregon Public Broadcasting or the Oregon Shakespeare Festival.