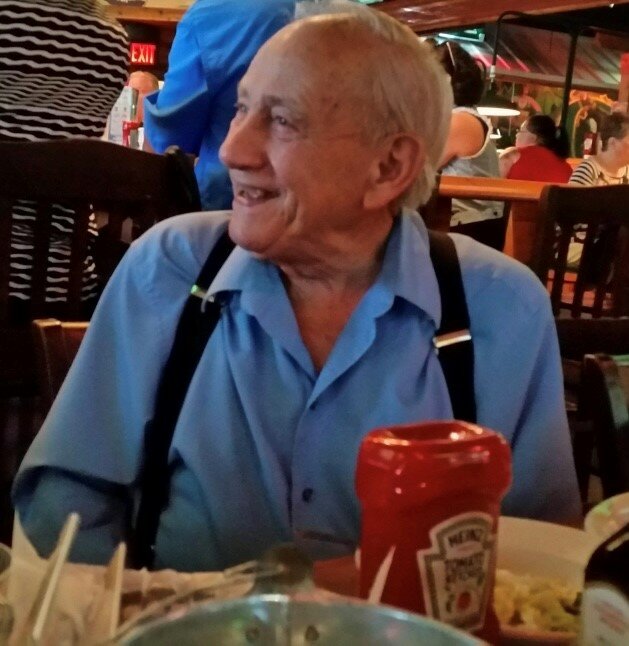 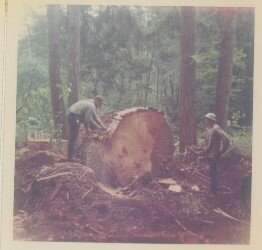 Roy David Marshall entered this world on August 20 1930, a Wednesday in Vaughn, Oregon. He was the 6th of seven children, 2 brothers and 4 sisters born to Harvey and Grace Marshall. Roy has lived his entire 91 years in and around Vaughn, Oregon. Roy attended local schools in the area and graduated from Elmira High School in 1948.

Roy married his high school sweetheart, Donna Wellman, on October 29, 1948. They first met on the school bus where Roy caught Donna’s eye and winked at her. To his surprise she winked back! That was the beginning of their love affair of more than 60 years.  Donna passed Sunday May 20, 2007. Roy and Donna’s first home was in Austa, Oregon until they moved to Belknap Camp near Blue River, Oregon in 1950. In the spring of 1952, they made their final move to their present home on Bolton Hill Rd in Veneta, Oregon.

Roy and Donna were blessed with four children: William (1950), Rodonna (1951), Robert (1954) and Sharon (1956). Dad was a very caring father who spent his entire life loving and supporting them, all the while teaching them the ways of the world. As soon as they could walk Roy was taking them fishing, on camping trips and blackberry picking to name a few. He would take his boys hunting with him before they could even carry a rifle just to teach them how to sneak quietly, track, spot that old white faced buck in his bed peeking out from under a maple tree at the bottom of a canyon, field dress and making the buck into a pack to carry out on your shoulders. In the early 1970’s Roy, Donna and William along with Roy (Walleye) and Deloris Wallace whom dad grew up with in Vaughn, acquired many Placer Gold claims in Josephine County and spent 47 summers mining there. Family and friends have numerous memories of camping and mining for gold with the adventurous and fun loving couple. Roy mined every year up through June of 2021 with William and his two grandsons John and Jesse.

Roy loved his family and he believed in God and knew his son Jesus as his Savior. Roy and Donna attended the Elmira Church of Christ. Roy enjoyed music and playing his guitars, fiddle, accordion, harmonica and singing along with Donna and many, many friends. All it would take was someone saying lets sing, or a good old fire and a bottle of homemade wine. Roy never had any training or lessons but man could he play; all by ear and self-taught. He really loved the old time country music by artist’s like Tex Ritter, Roy Acuff, Hank Williams, Patsy Cline, Buck Owens, Gene Autry, Claude King, Johnny Horton, Johnny Cash and so many others.

So many times you hear the old adage “he was a jack of all trades and a master of none”. Well Roy was the exception to that, he was the “Master of all Things” There was nothing that he could not do and “Every” time he did something it was detailed to perfection. Roy was a self-employed logger his whole working career but in reality Roy could have been a mountain man living off the land as good or better as those told about in the history books like Jim Bridger, Jeramiah Johnson and Kit Carson.Roy was a very Stout and Strong man with the highest tolerance to pain we

have ever seen. Many, many times he has carried out ½ of an elkfrom the bottom of a deep canyon on his army pack board.  There was one time he took his two sons 6 and 10 years of age fishing with him to the Erma Bell Lakes over 2.5 miles on a pack trail with snow on the ground. He loaded both of his sons, rubber raft, fishing tackle and poles, food and all on his Honda 55 trail bike and road all of that in and back out, truly amazing what he could do. Roy was an avid hunter and fisherman who would outshoot and out fish any one with him. It was even said Roy could catch a fish out of a mud hole if there was one in it.

He was so gifted, his memory was flawless. He could recall to the smallest details of his youth, all his hunting, fishing and mining adventures from the time he started to do them as a young boy growing up in Vaughn. Roy never had his IQ measured but without a doubt it would have been in the “Gifted” top 6.4% of the country as he knew all things of the world economy, farming, livestock, medical and political. If he took an interest in anything he would read books on it and learn it to the nth degree. Roy had so many friends over his life time that he truly loved. There was nothing he wouldn’t do for them as there was nothing they wouldn’t do for him, he had a special bond with so many.

Roy was a beautiful man, inside and out. His kindness and compassion were felt by all around him and the sky was always brighter when he was around. He left us with the legacy of love, hard work and determination to achieve our goals.

Roy Marshall passed away on Thursday, February 3, 2022. He was 91 years old. He is survived by his four children, William Marshall, Rodonna Lacky, Robert Marshall and Sharon Keep, and their spouses Christine (W), Pati (R) and Scott (S). He also left behind 11 grandchildren, 1 granddaughter who preceded him in death, 23 great-grandchildren and his beloved dog “Buddy”.

We will miss our Dad and the world will be a little less bright for a while. But we draw comfort in knowing that he has passed through Glory’s morning gate and has walked into Paradise joining so many loved ones and friends who have proceeded before him.

"In lieu of flowers donations can be made to the Applegate Pioneer Museum, 25755 Jean's Rd, Veneta, Oregon."

To send flowers to the family or plant a tree in memory of Roy Marshall, please visit Tribute Store