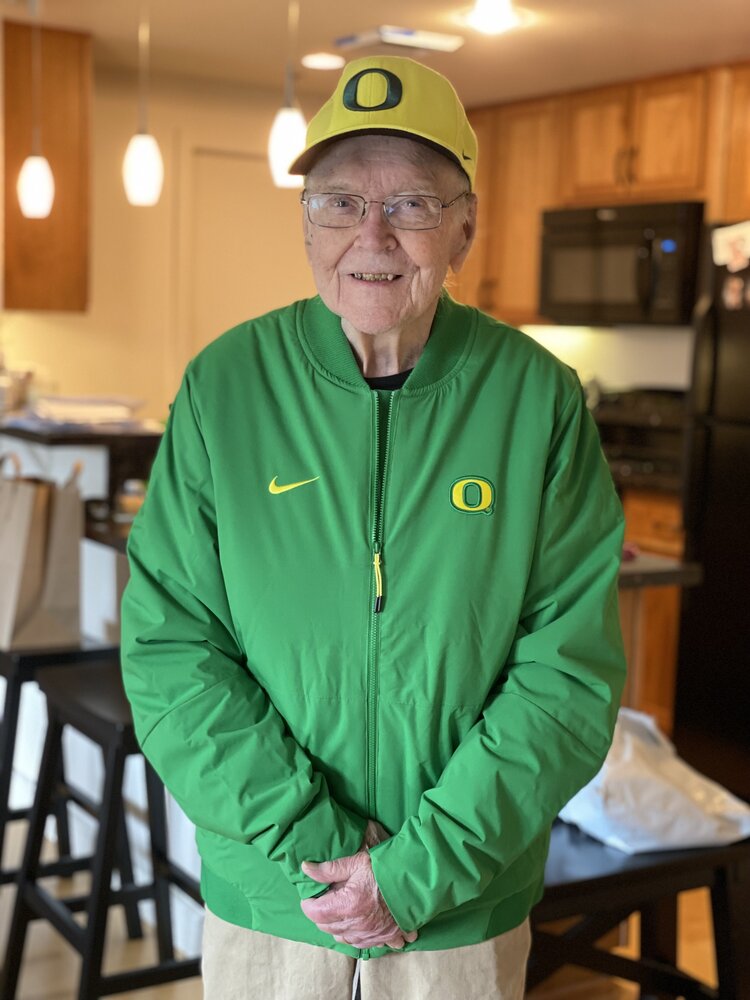 Loren Call Barlow, Jr, died at age 95 of the frailties incident to age on 2 February 2022 at home in Eugene, Oregon with his wife, Joyce, by his side. He was born 8 April 1926 in St Louis, Missouri to Loren Call Barlow, Sr, and Rachel Irene Smith Barlow while his father attended medical school at Washington University. His family moved to Phoenix, Arizona where his father practiced surgery until his death at age 36 when Loren was 5 years old. Subsequently, Loren, his older sister Rachel and their mother moved to Logan, Utah where he grew close to his Garandmother Smith while his mother completed her undergraduate studies at Utah Sate Agricultural College. They next moved to Chicago, Illinois where Loren fell in love with the Chicago Cubs while his mother earned a Masters Degree from the University of Chicago. Finally, they settled in Provo, Utah where Loren learned to love the Wasatch mountains, skiing, and tennis while his mother taught Home Economics at Brigham Young University (BYU). Loren earned his Eagle Scout before graduating from BYU High School in 1943. Prior to serving in the US Army in the Pacific from 1944 to 1946, Loren attended BYU where he met his future wife, Margaret Wilson. He married Margaret on 20 June 1949.

From childhood, he wanted to be a physician—he once hid in his father’s car so he could accompany him on his hospital rounds. He earned his MD degree from Northwestern University, interned at Evanston (Illinois) Hospital, and completed three years of internal medicine training at the Mayo Clinic in Rochester, Minnesota. In 1955, he began his solo practice of medicine in Eugene, Oregon by hanging out his shingle and waiting for patients to show up. After 17 years of eventually very busy solo practice, he formed a partnership and professional corporation with Drs John Bonzer and Bill Holcomb in 1973. Always impressed by the Mayo Clinic model of multi specialty group practice of medicine, Loren advocated for, and became the first president of, Oregon Medical Group in 1988. He was disappointed by the subsequent failure of further integration of medical care in Eugene. He concluded his career with Peace Health Medical Group before retiring in 2003, although he remained active in Quality Improvement projects until 2009. He served voluntarily as Chief of Staff at Sacred Heart Hospital between 1969 and 1971 and served on many Sacred Heart and Peace Health boards and committees.

Welcomed by Margaret’s sister Marian, her husband Met Wilson, and their children, Loren and Margaret and their children quickly felt at home in Eugene. Loren soon became an avid fly fisherman, a loyal fan of the Oregon Ducks, and a founding member of the Eugene Swim and Tennis Club. He and his family attended all of the U of O football and basketball home games and track meets. (He never lost his Great Depression habit of frugality; refusing to buy himself or his children popcorn or drinks at the games!) He also attended countless swim meets, Eugene Boys Athletic Association games, and junior and senior high school sporting events to watch his children compete.

Additionally, he and Margaret loved to attend the Bach Festival, the Eugene Symphony and the Oregon Shakespeare Festival. They joined four other couples in a play reading group that met for 20 years. They both loved vacations to the Oregon Coast, to Minnesota in the 1960s to see the Metropolitan Opera touring company with Met and Marian, and to England for one much anticipated and fondly remembered trip in 1977. Loren and Margaret were thrilled when Met and Marian retired to Eugene, allowing them all to indulge in their favorite pastime—playing bridge. Folllowing Margaret’s death in 1989, Loren married Joyce VanHall on 5 November 1994 and welcomed her two children into his home.

During his retirement Loren provided free medical care at the Volunteers in Medicine Clinic. He became an avid reader, especially of US history, played tennis into his 90s and remained a keen observer of current events. For many years, he gathered his children, their spouses and his grandchildren for a reunion each summer. At the encouragement of his children, he wrote his autobiography. He listened to classical music and jazz, enjoyed modern art, traveled with Joyce, his children and his tennis buddies and never wavered in his loyalty to the Ducks (adding women’s basketball to his list of must-see games). In 2016, his beloved Cubs finally won the World Series, ending a drought of 108 years.

Loren was preceded in death by his father, Loren, Sr, on 2 June 1931, his mother, Irene, on 17 July 1979, his wife, Margaret, on 20 December 1989, and his sister, Rachel, on 12 June 2014. He is survived by his wife, Joyce, her children Bob Cherney of Perth, Australia and Jesse VanHall of Eugene, Oregon, his children Stephen (Kathleen) Barlow of Salt Lake City, Utah, David (Margaret Graham) Barlow of Seattle, Washington, Janet (Rick Mitchell) Barlow of Portland, Oregon, John (Tamsin) Barlow of Rochester, Minnesota, 19 grandchildren and 17 greatgrandchildren—the youngest of whom (Olive Loren) was born a few hours before his death.

The family is grateful to all the medical personnel, including Brighton Hospice nurses, who cared for Loren during his final months.

A graveside memorial service will be held at Rest-Haven Memorial Park, 3900 Willamette Street in Eugene, on Friday 25 February 2022 at 1 pm. An Open House will be held at 1819 Fairmont Blvd in Eugene between 2:30 and 4:30 pm the same day.

In lieu of flowers, the family suggests donations to the Volunteers in Medicine Clinic of Lane County (www.vim-clinic.org) or to the Eugene Mission (www.eugenemission.org)

To send flowers to the family or plant a tree in memory of Loren Barlow Jr., please visit Tribute Store