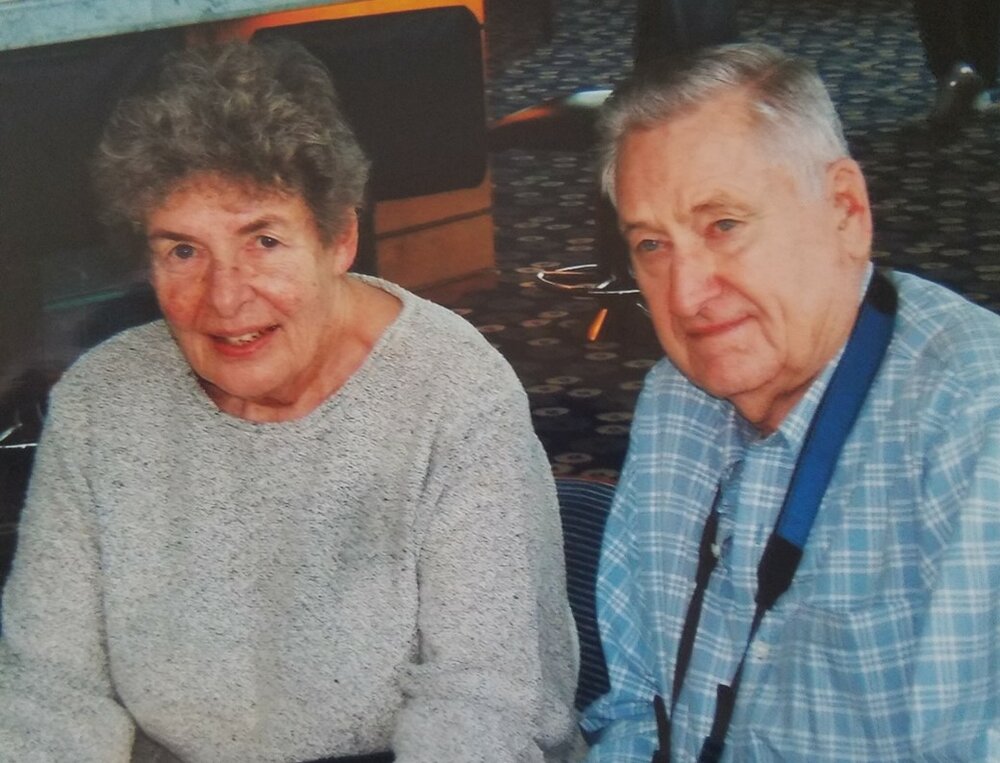 Richard was born in Harrisburg, Oregon to Harvey Lewis Skirvin and Ouida Young Skirvin.  Graduated from Harrisburg High School class of 1950 where he played sports.  Janet was born in Junction City to Kyle Nelson Howard and Magdeline Stroda Howard. She graduated from Harrisburg High School class of 1952 and was a school cheerleader.  Richard, known to most as Dick, was not afraid to face life’s challenges head on, they shared a love for exploration and adventure.  After marrying December 22, 1951, they farmed rye grass up until January of 1960, when they packed up their three children and their belongings to move to Arizona.

He began work in Tucson as a door-to-door salesman selling WearEver pots and pans, then after taking night classes at Pima Community College, secured a job as administrative supervisor with Bell Aerospace the company that built Bell helicopters, powered flight backpacks and unmanned drones.  During the years working for Bell, Dick moved his family from Tucson to Gila Bend, Sierra Vista, and Yuma before returning to Tucson.  Give Janet lots of credit for raising three unruly kids in desolate desert towns where there was little to do besides swimming and worshiping the sun!  Back in Tucson in about 1970, Dick started his own business of home remodeling.  He studied for and successfully became licensed as a construction general contractor.  He built his own duplexes and apartment buildings while continuing his remodeling business.

Dick always loved sailing and even built his own boat, he sailed every chance he got.  He became actively involved with the US Power Squadron in Tucson and eventually became their Commodore.  They enjoyed sailing trips in Arizona lakes, San Diego harbor, Catalina Island, Oregon lakes and the Oregon coast. They also enjoyed off-road trips to explore ghost towns, abandoned military forts, and Indian ruins.  While living in Yuma, Janet worked the lobby desk at the Star Dust Hotel where she met many TV and movie stars while they filmed in the nearby sand dunes and other locations.  Then when they moved to Tucson, she worked the lobby desk at the Hilton Hotel, also meeting many famous TV and movie stars who were filming at Old Tucson and nearby locations.  Janet had a life-long love for sewing, knitting, and quilting, she was actively involved in making prayer shawls.  In 1999, Dick and Janet returned to Oregon to retire and run the family farm between Junction City and Harrisburg. While here in Oregon they both mentored kids at school in a reading class and by the way Dick spoke of his students you could tell he really loved what he was doing. It was rewarding for them and the students.

Just a dream and the wind to carry me

And soon I will be free."

You are free now, Mom and Dad!