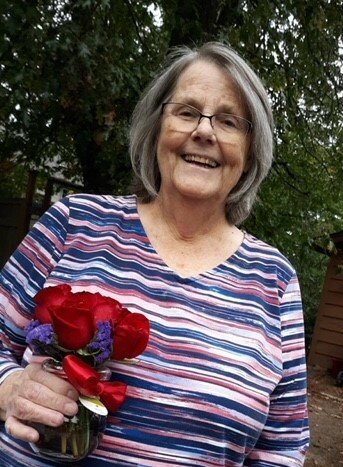 Mary Elizabeth Walsh passed away Monday October 18th, 2021 at the age of 75 from a 2 year battle with ovarian cancer.  She is survived by daughter Meghan Walsh, sisters Debbie (Bob) Fuller and Harriet (Ed) Barros.  She was aunt to Sarah Barros, Katherine (Jesse) Barros-Wright, and Elizabeth (Eric) Rossberg.  She was great-aunt to Ben Jones III, Lilly Jones, Emani Jones and Wren Wright.

Mary’s death was preceded by her husband Thomas E. Walsh in 1992, and parents John S. and Dorothy Bryant.

Mary was born and grew up in Pittsburg, California.  She later moved to San Francisco where she met and married her husband Tom.  Eventually they moved to Eugene to raise their daughter, and has remained ever since.

Mary was always there for her daughter – her mom, her friend and her most enthusiastic cheerleader in sports, in school and in life.  She was ever our teacher in all things creative – cooking, canning, gardening, crafts and sewing.  Her presence will be greatly missed by her family and many friends.

There are no services scheduled at this time.  A Celebration of Life will be planned for later when the weather gets nicer.

In lieu of sending flowers, donations can be made to Positive Community Kitchen, a service she was lucky enough to be offered and greatly appreciated.  https://www.positivecommunitykitchen.org/