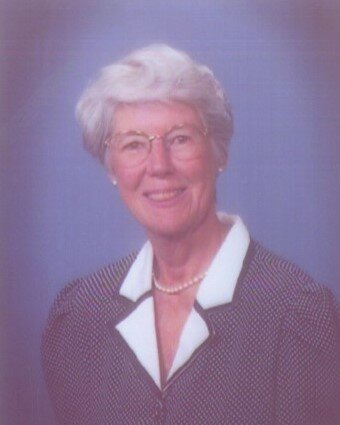 Hazel Dudley Jones of Eugene died October 2, 2021 at 90 years old. She was born August 16, 1931 in Portland, Oregon to Raymond E. and Mary Morris Dudley. She married Richard R. Jones August 5, 1951 in Dayton, Washington. They lived in Reno for ten years before they moved to Eugene where Richard served over twenty years on the Eugene Fire Department. Richard died December 19, 2002.

Ms. Jones worked as a copywriter in radio and television in Reno. She began work at the Bureau of Governmental Research at the University of Oregon in 1966, was head secretary in the UO Mathematics Department before becoming the Dean’s Secretary in the College of Arts and Sciences. She was a Certified Professional Secretary (CPS). She retired from the University December 31, 1985 though substituted in administrative offices for a number of years following official retirement.

She was past president of Amanuenses Chapter of Professional Secretaries International and member of Certified Professional Secretaries International. She was twice named Secretary of the Year. She belonged to Osher Lifelong Learning Institute where she received the Earl Hain Award for Outstanding Contributions. She was a Daisy Duck and avid Duck football and basketball fan. She was an ordained Deacon and Elder at Westminster Presbyterian Church. She co-authored books on the history of Westminster Presbyterian Church.

She enjoyed her family and friends, writing, reading, quilting, traveling, bridge. Survivors include her daughter Valerie Lawson (Bob) of Eugene and her son Larry (Lisa) of Terrebonne, Oregon. She has three sisters and one brother, three grandchildren and seven great grandchildren. Two brothers preceded her in death.

Musgrove Family Mortuary in Eugene is in charge of arrangements. Memorial contributions may be made to the Memorial Fund at Westminster Presbyterian.

To send flowers to the family or plant a tree in memory of Hazel Jones, please visit Tribute Store