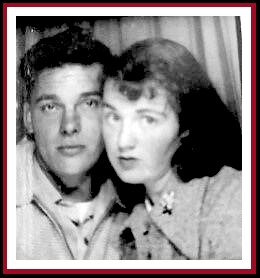 Joe Roy Simpson was born on June 7, 1935 at Fort Sill, Oklahoma. He was adopted as a baby by Sergeant Lon Simpson and his wife, Otha. Both were already in their mid 50’s with a grown son. Joe learned to hunt and fish with his adopted father who he loved and always called Dad.

Lon died when Joe was just 16. He dropped out of high school to help support his mother, going to work for the local florist – first just working with the flowers then later driving the delivery truck.

He enlisted in the Marines on his 17th birthday. In November of 1952 while stationed with the Marines at the Treasure Island Naval base in San Francisco, he met a shy 15-year-old high school girl. It was two weeks before Thanksgiving and the Disabled Veterans were holding their annual drive for donations in Oakland. The Veterans would have a volunteer with them, handing out a paper Forget-Me-Not for each donation.

The Marines learned of the Veterans’ drive and stepped in, saying the Disabled Veterans had done their part, then they took the place alongside the female volunteers. Joe was paired with the 15 year old volunteer who was so shy he had to tell her how to approach the public with the Forget-Me-Nots.

That was the beginning of a lifelong love that lasted 69 years. After dating for 3 months, Joe decided who he wanted to marry. He proceeded to pick out both the engagement and wedding rings himself, but he never did get around to asking her to marry him!  It took nearly all his pay to make the monthly payments on the rings, but he did.

In 1954 Joe was sent to Pusan, Korea – he was stationed on Radar Hill as a radar repairman. He served there a year and returned home to the San Francisco Bay Area and was discharged on June 6, 1955. They were married on June 18, 1955 – 2 days after she graduated from High School. The Forget-me-Not flowers that brought them together were the real Forget-Me-Not flowers in her wedding bouquet.

Over the years, Joe went to work for several electronics companies due to his knowledge of radar. In 1965, he was hired by the Lawrence Livermore Laboratory in the Physics Department. Even though Joe lacked a high school diploma or college degree, it was his intelligent mind that made him stand out. He had the mind of a scientist, the heart of a little boy, and the honor of a knight.

Joe loved his two sons and was so proud of what they accomplished as adults. He also loved his two grandsons as well. He couldn’t sing or dance, and was uncomfortable in social gatherings, but he loved a variety of other things – used bookstores, antique cars, historic homes, anything about science, and his beloved John Deere tractor. Most of all, he still loved that school girl and always let her know it with flowers, a special card, and dinner at one of their quiet restaurants. He still held her hand and called her “sweetie”. Through the good times and the bad, they were there for each other – the shy school girl and the 17 year old Marine.

If there is such a thing as the Love of a Lifetime, then Joe and I shared it for 69 years.