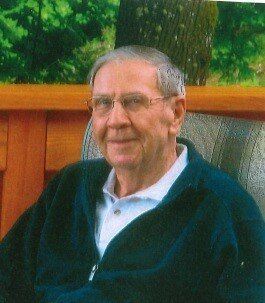 Donald Blair Buechler passed away on September 1, 2021 with his wife, Suzanne, by his side.  He was born August 3, 1934 in Valley city, North Dakota to Eunice and Fred Buechler.
Don Graduated from Lewis and Clark College in Portland, OR where he met his wife to be of 63 years, Patricia Suzanne Gilbert.
He served in the US Air Force from 1953-1957 before becoming a dedicated, GM Large Truck Division Executive for 30 years.
During his working years, Don enjoyed involvement with his immediate family and close friends; camping, water skiing, traveling, golfing and just being a husband and father.
Upon retiring from GMC, he and his wife Suzanne returned to Oregon to build their dream ranch home, Shepard's Gait, on a hilltop off Jaeg Road just outside of Junction City.  There, Don enjoyed his country life; trail riding, horse camping, winery events, Long Tom Grange hall involvement, Junction City United Methodist Church fellowship, and golf at Shadow Hills Country Club where he and Suzanne were members.
As Don's health began to fail, he and Suzanne made the move to the Springs at Greer Gardens where he enjoyed the lovely grounds and amenities as best he could over the 3 years of decline.  Don died there, in their home, with the comforting assistance of Hospice and his wife by his side, holding his hand.
Don is survived by his wife, Suzanne Buechler, daughter Jill Carnahan and Bill Carnahan of Eugene, OR, son John Buechler and Michael Brown of Portland, OR, and son Steve Buechler and Nancy Buechler, parents of their three grandchildren; Samantha, Madison, and Jeremy Buechler, all five of the state of Virginia.
His family wants to express deep gratitude to his care takers, therapists, and Hospice nurses.  He was always cared for in a compassionate way.
Don was cremated at Musgrove Family Mortuary on Saturday, September 4th.  His urn of ashes, chosen by family, will remain at their home with Suzanne until they are placed in their plot at Gilliland Cemetery in May of 2022, during a traditional family reunion and remembrance event.
Arrangements entrusted to Musgrove Family Mortuary. Please access the obituary and you are invited to sign the guestbook at musgroves.com.

To send flowers to the family or plant a tree in memory of Donald Buechler, please visit Tribute Store