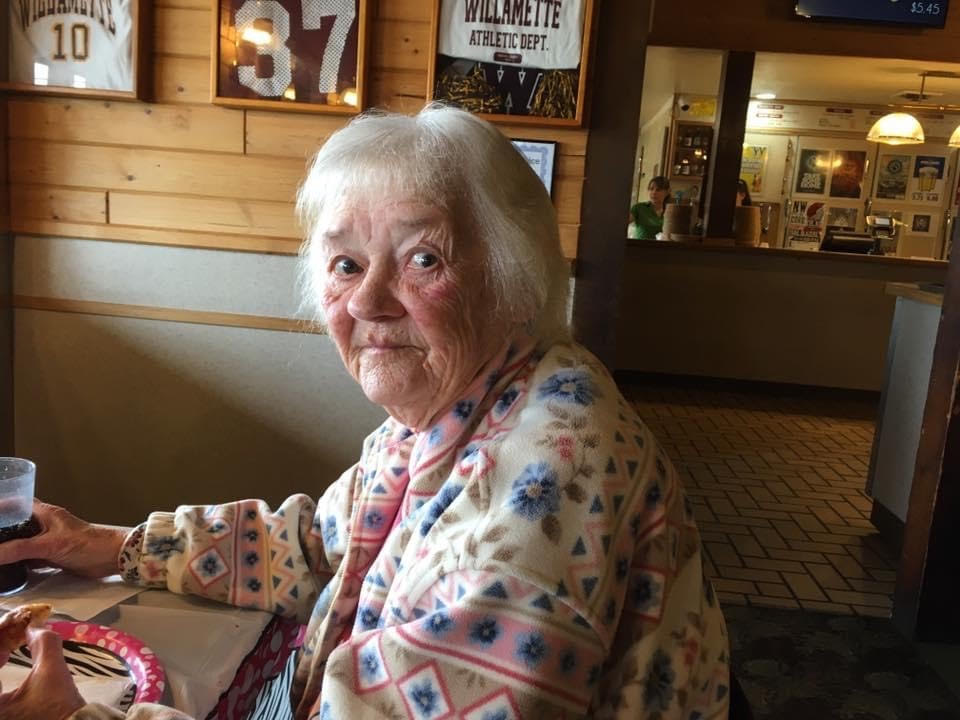 Nita Marie Killgore Brown, 91 passed away peacefully at her home in Eugene, Oregon on July 1, 2021, of natural causes.

Howard died in Texas and Edith moved with the six children to live with her family in Oklahoma. The children were Dorothy, Velma, Nita, Arlene, Fern, David and Lloyd. Dorothy died of Diptheria at the age of 10.

Nita met Lonnie Brown in McAlester, OK. They were married on August 29, 1945. Together they had six children, Lonita, Terry, Larry, Debra, Jackie and Dorothy, who were raised in Eugene.

Lonnie died in August 1964, leaving Nita as a single mother and the only provider. She briefly owned a donut shop, was a van driver for the Bethel School District, then a Driver’s Ed teacher for Bethel School District. She also delivered the paper delivery for the Register Guard, and worked for Diamond Parking before retiring.

Nita enjoyed working in her garden growing tomatoes. She was proud of her canned goods and enjoyed sharing them with others.

She was preceded in death by her parents, sisters Dorothy Killgore, Fern Wood, Velma Killian, her brother David Killgore, her son Terry, and grandsons Tony Brown and D.J. Hober.

She is survived by her sister Arlene Pourroy of Bakersfield, CA, brother Lloyd Kilgore (Judy) of Eugene, sister-in-law Naydene Killgore (David) of Albany. Her adult children, Lonita Tope (Chris) of Jefferson, Nellie Brown (Terry) of Elmira, Larry Brown of Eugene, Debra Rowe of Florence, Jackie Wrinkle of Eugene, and Dorothy Hober of Creswell. She is also survived by 9 grandchildren and 17 great-grandchildren and 15 great-great grandchildren.

A celebration of life potluck picnic will occur on July 15, 2021 at 11:00 at Lively Park Pavilion in Springfield. A funeral for Nita will be held on July 16, 2021 at 11:00am at Springfield Memorial Funeral Home.

Arrangements are being made by Springfield Memorial Gardens and Funeral Home. In lieu of flowers, donations may be made to the Nita M. Brown Memorial Donation Fund set up by Audra Ramirez at any Umpqua Bank.

To send flowers to the family or plant a tree in memory of Nita Brown, please visit Tribute Store