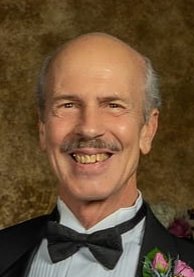 Wayne E. Hanson, beloved husband, dad, and grandpa, passed from this world into eternity on Thursday, May 20th, 2021 at the age of 70. After being diagnosed with a glioblastoma brain tumor on March 1st of this year, and subsequently experiencing the rapid loss of his ability to walk, talk, and exercise his fierce independence, Wayne relied on the loving care of family and close friends until he suddenly succumbed to pneumonia symptoms, which often mark the end-of-life process for glioblastoma patients. Wayne's lively presence and deep faith in God, which he shared with everyone around him, will be deeply missed by all who knew him.
Son of Elmer and Cecilia Hanson, Wayne Edward was born in Eugene, Oregon on October 24th, 1950. After graduating from St. Francis Catholic High School in 1968, he pursued automotive painting, receiving training at Lane Community College, and quickly became sought-after as one of the area's most skilled professionals. As a young adult, Wayne owned many classic cars, which he took pride in displaying at car shows after painting and detailing them with distinctive stripes, flames, or lace-painted designs.
On September 16th, 1972, Wayne married his sweetheart, Leslie, and gradually left his show cars behind to provide for his growing family, which quickly became his new passion in life. After leaving the automotive painting profession to join his wife in her thriving health and wellness home business, Wayne enjoyed the freedom of being his own boss, which gave him the flexibility to spend time enjoying, nurturing, and teaching life skills to his seven children. A jack-of-all-trades, Wayne could often be found lending a helping hand or imparting wisdom and knowledge to family, friends, and even strangers whenever he had the chance.
An excellent singer from a young age, Wayne sang in the church choir wherever he attended Mass, most recently singing bass at St. Mary Catholic Church in Eugene. Inspired by God to share his faith through song in his early years of marriage, Wayne formed One in Spirit, a men's Gospel quartet, and performed around the state. When he wasn't performing, his deep bass voice often resounded through the house and yard as he went about his many daily tasks. Wayne taught his children to sing almost before they could walk, beginning with favorites such as "Edelweiss" and "You Are My Sunshine."
Eventually, all his kids learned how to sing harmony, and Wayne proudly looked for opportunities to share the family's gift of song with others. At Wayne's encouragement, his four youngest children developed their exceptional instrumental and vocal skills, and became known for their intricately-woven harmonies. When his focus shifted from the Gospel quartet, Wayne began actively promoting The Hanson Family music group. As they traveled the continent to perform, Wayne spent hours behind the wheel of their big van on a mission to bring joy to audiences everywhere. When the family won awards, both for their live performances and the albums they released featuring their unique western music arrangements, Wayne's dreams came true.
As his children married and had children of their own, Wayne regularly looked for opportunities to teach his grandchildren to sing, play songs on the piano, chop wood, play games, mow the lawn, dance, fix things, and a myriad of other skills. Most importantly, Wayne passed along his love for God and a growing desire to trust in God's providence.
Wayne's Catholic Faith was increasingly important in his life with each passing year, and the time of his death was peaceful and prayerful. His wife and sons were at his side, and all his daughters joined with them in prayer, via video call, to speed their dad on his way. His presence will be deeply missed until, by God's grace, the whole family is reunited in Heaven, singing perfect harmony throughout eternity.
Wayne is mourned by his beloved wife of 48 years, two sons, five daughters, twenty-five grandchildren, two brothers, one sister, and countless other family members and friends. Please join the family in remembrance and prayer for Wayne at the following services: Vigil Rosary and Viewing at 6:30 pm on Sunday, June 6th, 2021, at St. Catherine of Siena Catholic Church, Veneta, Oregon; Viewing at 10:30 am, Rosary at 11:30 am, and Mass of Christian Burial at 12:15 pm, Monday, June 7th, 2021, at St. Mary Catholic Church, Eugene, Oregon. After the funeral Mass, all are invited to attend the Rite of Committal at West Lawn Memorial Park, immediately followed by a reception luncheon at St. Catherine of Siena Catholic Church, Veneta, Oregon.
Arrangements entrusted to Musgrove Family Mortuary. Please access the obituary and you are invited to sign the guestbook at musgroves.com.

To send flowers to the family or plant a tree in memory of Wayne Hanson, please visit Tribute Store