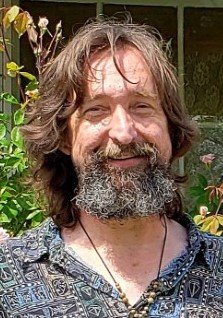 Stewart has lost his year-long fight for life to a rare adrenal cancer. When asked about his chances of getting this diagnosis he liked to say, “I’m one in a million!” It was typical of Stewart to find the bright side to any trial or tribulation in his life. He greatly appreciated all those who cared for him during this struggle – his medical team of doctors and nurses, his family and especially his loving fiancée, Constance Miller.

Stewart was born and raised in Eugene, Oregon and lived his 57 years in the area. He attended South Eugene High School and Lane Community College. He became a Certified Alcohol and Drug counselor in 2006 and worked in the field until recently. He expanded his counseling career into facilitating grief and loss workshops. His latest career pursuit was designing Spirit Language T-Shirts and was going to open a store called “Things That I’m Interested In”. Stewart married his high school sweetheart, Daria Stallings in 2003. He was widowed in 2017.

Stewart was a curious person, interested in people and the world beyond the physical. He liked to explore the unknown and better understand whatever experiences life presented to him. He was very intuitive and communicated in ways that did not always depend upon hearing.

As a child, his mother said, he was the most interesting person; adults liked to talk to him. He liked to question people to get to know them and was interested in their well-being, whether friend or stranger. At about five years of age, he would wander the neighborhood to visit the elderly people at home. He had a strong connection to animals from his childhood on. Cats especially loved him; he collected quite a few strays over time.

Stewart was passionate about dancing, listening to music, singing and drumming. Many people have been gifted with birthday cakes and bread that he baked, skills he gleaned from his grandmas. He collected things like rocks, crystals, and many quilts. He had a wry sense of humor which came out in his writing; he had intended to publish a book about his life and had written a few chapters. Stewart would say “I got stepped on by a journey” and used it as the title to his book. He would explain that this is just part of the process of life.

Stewart had 21 years of sobriety, was a member of Narcotics Anonymous and devoted his life to helping others. Stewart was an active member in Lane County Recovery Community and will no doubt be missed by many there. Stewart was also a core group member of Stone River Community, a nonprofit organization who sponsors Lane County Wellbriety meetings. Stone River Community follows a spiritual path that encompasses many spiritual philosophies, including the “Red Road” - a Native American Philosophy. Stewart’s work on this path, his involvement with others following this path and his participation in ceremony was yet another way Stewart gave back in service to others. His chair will forever be honored there, and he will continue to be a guide on the other side.

He was a Spiritual Warrior, a healer, a spiritual brother to many, a valued and sough-after support person, an irreplaceable community member and a leader. Stewart, at times, seemed to come from a different planet, (and he would love to be described in this way.) Stewart took every single experience in his life and turned it in to a lesson that supported spiritual growth and emotional health, and then gave back what he learned.

Stewarts’ heart was as big as the universe, his smile a welcoming and safe place. Stewart lived his life in service to others, and inspired others to do the same. Stewart was a bright light in the darkness for those who felt lost. There will not be another like him.

Stewart is preceded in death by father, Ed Smith and wife, Daria Stallings Smith. Survivors are fiancée, Constance Miller, mother, Marjorie Smith, siblings, Gayle Smith (Dale Deason), Jenny Allen (Mark Allen), Mitch Smith (Liza Caribo Smith) and many loved ones. Stewart did not have any children of his own but was adopted by many children and grandchildren who call him father and grandpa.

In lieu of flowers, donations can be made to Stone River Community in care of Jon Roberts, 4986 Morely Loop, Eugene, OR 97402 or by direct deposit to Venmo@jon-roberts-70. Or donations can be made to support the Rogel Cancer Center Adrenal Cancer Program.  Checks may be made payable to the “University of Michigan” and sent to the Michigan Medicine Office of Development, 1000 Oakbrook Dr., Suite 100, Ann Arbor, MI 48104.  You may also call 734-764-6777 or visit the website at: victors.us/stewartsmith to make your gift.

A Celebration of Life will be held April 17, 2021 at Alton Baker Park, 2:00 pm. Details will be posted on Stewart’s facebook page. Grief is praise, and we will be praising you up, brother.

To send flowers to the family or plant a tree in memory of Stewart Smith, please visit Tribute Store

Share Your Memory of
Stewart
Upload Your Memory View All Memories
Be the first to upload a memory!
Share A Memory
Send Flowers