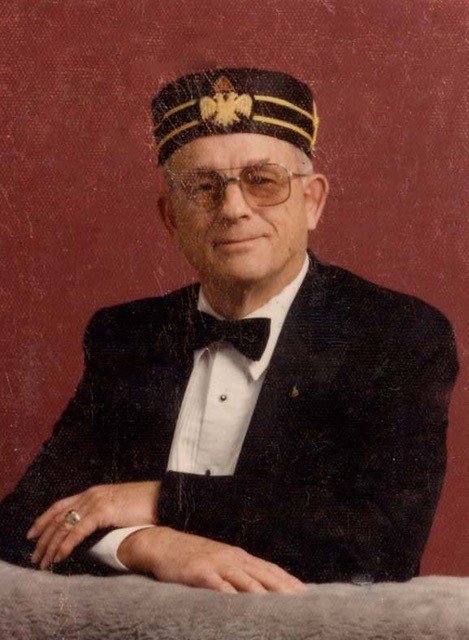 Ivan James Smith passed away after a fall in his home. Ivan was 96 years old. Ivan was born in Powell, Texas in 1924 and moved to Oregon in the early 1940's and continued to reside in Eugene, Oregon until his passing. Ivan married Georgia Beebe in 1943 and they were married for 66 years before his wife's passing in 2009. They had 2 children Elaine and David and were blessed to have 3 grand children, Richard, Steven and Rachel.
Ivan joined the Masonic Lodge in 1945 and was an active member of the fraternity through his life. Ivan held various offices in all levels and activities in the lodge including  Scottish Rite, Knights Templar, Knights of York, Council of Amaranth, Governor of Champoeg College, Royal Ark Mariners, Past Commanders Association,  and honorary memberships in several lodges in various states through his service including Master positions. One of his most proud and satisfying achievements was his work through the Masonic Eye Foundation AERS Representative where he helped over 50 blind adults and children gain sight.
Ivan worked in Eugene where he established himself as a premiere painter in the automotive business for over 25 years after which he went to work for Lane County in the Road and Highway Department.
Ivan loved music. He was an accomplished guitarist and played lead guitar and lead singer in a band in the 1950's. The band was named “The Western Valley Boys” and they played country music throughout the greater Lane County area for several years. Ivan was privileged to play for well known artists like Tex Ritter, the Bonanza TV stars and others when they came to Eugene for special events like the Lane County Rodeo as Grand Marshals. When Ivan reached his late 80's his son David introduced him to Karaoke and Ivan once again fell in love with the spot light. Ivan would entertain Karaoke crowds with his country songs as often as he could, sometimes several time a week. Ivan continued to sing until the Covid-19 pandemic closed all of the local locations.
Ivan will be missed by all of those who knew him, for his silly jokes, his love and his kindness. If anyone deserved a mansion on the other side as promised by Jesus Christ it would be that sweet old man, my dad.
Services will be held at West Lawn Memorial Park on Danebo Ave on Tuesday, December 29th at 2:00 pm. Services will be held outside at the grave site. (NE corner of the cemetery).
Arrangements entrusted to Musgrove Family Mortuary. Please access the obituary and you are invited to sign the guestbook at musgroves.com.

To send flowers to the family or plant a tree in memory of Ivan Smith, please visit Tribute Store

Share Your Memory of
Ivan
Upload Your Memory View All Memories
Be the first to upload a memory!
Share A Memory
Send Flowers