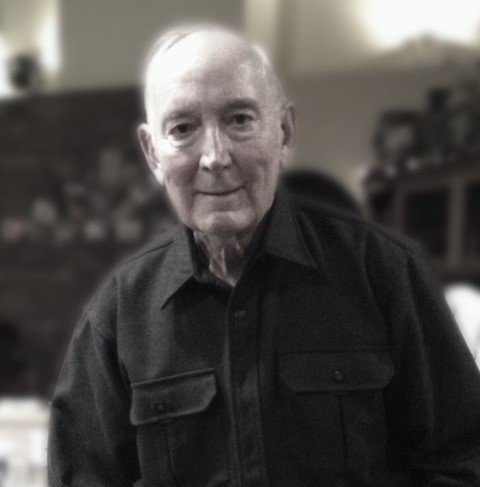 On Friday, November 20th, Dale Stauffer passed away peacefully in his sleep, surrounded by family. He was 84.

He was born on April 27th, 1936 in Colorado but spent most of his life in Eugene, Oregon. He graduated from Willamette High School in 1954, excelling at playing basketball there and later for the Marines. He served in Korea, Okinawa, and mainland Japan before returning to Eugene to marry Donna Hinton in 1958.

He got his bachelor’s degree in teaching and his master’s degree in counseling from the University of Oregon, finishing in 1965. He then began his 31-year career at Cascade Middle School as a teacher, counselor, coach, and mentor. His impact on Eugene was far reaching. His family often remembers smiling former students and coworkers coming up to him to thank him for his help and advice.

Dale was creative, a problem-solver, and had big dreams. He was strong and not afraid of the hard work it took to accomplish those dreams. He built four houses along Gimpl Hill Road in West Eugene, doing everything from drawing up the plans and excavating the site to building the structure and choosing the finishing touches. He also built two horse stables and arenas and had a thriving business outside of his busy career.

Dale was an outstanding husband, father, grandfather and friend. He was a good listener and supportive to so many.  Countless good times were spent riding horses, camping and celebrating special occasions. His Gimpl Hill gang was always up to something fun and very close to his heart.

Dale and Donna were married for 62 wonderful years, raising three beloved daughters, six grandchildren, and one great-grandchild. Dale knew how to enjoy life. As avid Duck fans, he and Donna attended football and basketball games for many decades. They were able to travel the world and always enjoyed special times with family and friends.

Dale is preceded in death by his parents, sisters, and his son Michael. He is survived by his wife Donna, his daughters Jolinda Miller (Jon), Dalene Rethmeier (Blaine) and Kristin Ouellette (Mark), his grandchildren Morgan Miller (Jesica de la O), McKenna Miller, Taylor Rethmeier (Kate), Hailey Rethmeier, Jordan Ouellette, Chase Ouellette, and one great-grandchild Maximo Miller. He leaves behind so many friends and family who love him dearly. We were all lucky to have him in our lives. Dale will be greatly missed.

A celebration of life will be held at a later date. In lieu of flowers a donation can be made to Sacred Heart Hospice.
Arrangements entrusted to Musgrove Family Mortuary. Please access the obituary and you are invited to sign the guestbook at musgroves.com.

To send flowers to the family or plant a tree in memory of Dale Stauffer, please visit Tribute Store

Share Your Memory of
Dale
Upload Your Memory View All Memories
Be the first to upload a memory!
Share A Memory
Send Flowers