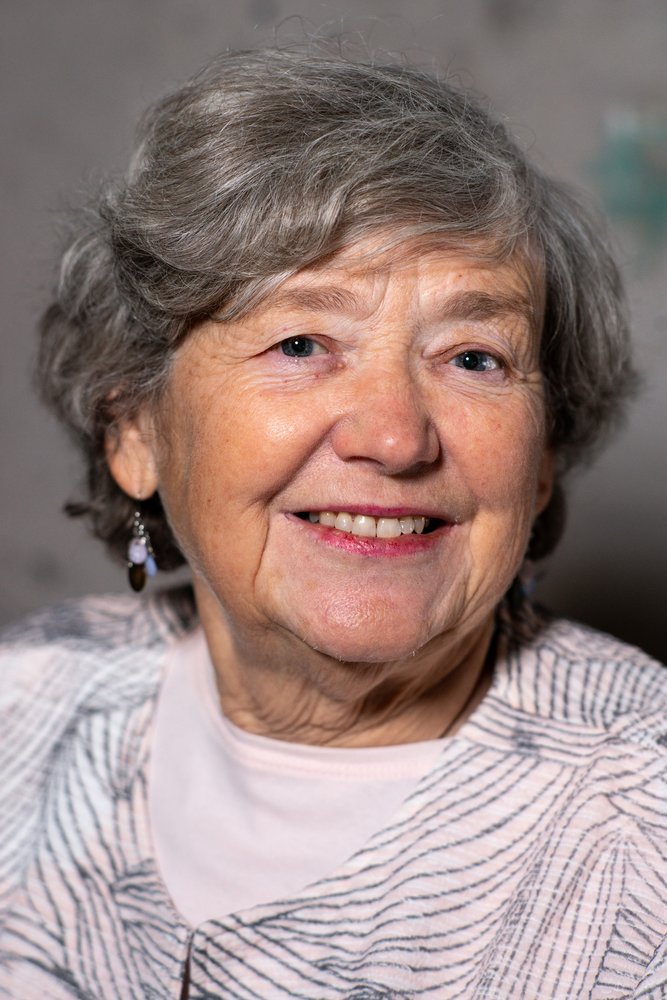 Florence Alvergue, a longtime resident of Eugene and a beacon in the community, died on November 3.  She was 78.

Flo, as she was affectionately known, was a public-school teacher, a wife and mother, an accomplished pianist, an avid community volunteer and a political activist. Whether it was the League of Women Voters or the Girl Scouts, Flo gave all of herself as a volunteer and was truly dedicated to each and every cause.  She had a kind, caring, and loving spirit which garnered her a multitude of friends.  She had the rare gift of making everyone feel comfortable and included; one just felt good in her company.  Wherever she went, she would often converse with strangers-- who would likely become new friends-- offering her big heart to listen and share stories, and always ready to extend a helping hand.

Florence Elizabeth Langtry was born October 20, 1942 in Washington D.C. Her father Wilbur Langtry was an attorney for the Treasury Department and her mother Annie Reid Morgan Langtry was a secretary for the Treasury.  When Flo was 11, the family relocated to Albany, Georgia, to be close to her mother’s family and her father worked there as a management consultant.  Flo fondly recalled spending summers with her sister and cousins at "Bamma's" farm, where her music teacher grandmother trained the grandchildren on piano, rewarding them for practice with trips to the Lighthouse Drive-in and Dairy Queen in Americus, GA.

She attended Albany High School from 1956-1960. She was President of the Future Teachers of America and represented her chapter in the Miss Albany High School Contest.  Flo attended the University of Georgia, majoring in Home Economics Education, and was an active member of Alpha Gamma Delta sorority.  She spent her summers working her way through college waitressing at The Cloister in Sea Island, Georgia, and Jackson Lake Lodge in Grand Teton National Park.

Upon graduation in 1964 she faced a choice: enter the Peace Corps or head west to teach. She chose the latter and was hired at South High School in Bakersfield, CA, a dusty frontier town hungry for young teachers. It was there that she met her future husband, George Robert Alvergue, also a teacher.  Flo and George’s relationship was a marriage of two very different American stories-- she a daughter of the Deep South, he an Army veteran from the streets of San Francisco.  They bonded over a love of history, education and travel.

Although they intended to remain in California, they eventually settled in Eugene, Oregon in 1968 for George to pursue his post-graduate work in American History. Flo continued to teach Home Economics at the secondary level, landing a position at Briggs Middle School. Flo went on to receive her Masters of Arts in English at the University of Oregon, finishing her teaching career as an English teacher at South Eugene High School.­­  She was known to have a mind like a steel trap—she could cite names, dates and events off the top of her head, offering background to any given subject.

In retirement, Flo enjoyed traveling and was passionate about gardening, cooking, birding, quilting, and reading.  She was a lover and supporter of the arts, and a dedicated volunteer for a number of organizations including the Eugene Bach Festival, OLLI (Osher Lifelong Learning Institute), and the League of Women Voters, where she served as President from 2005-2007.  She participated in multiple quilting groups and book clubs and since 2016 was heavily active in an Indivisible group.  She loved to entertain—from grad students to extended family—and would often host club meetings at her home.  She was also a devoted grandmother—writing weekly letters, cooking and crafting, and encouraging development in the music and the arts.

Flo was preceded in death by her husband George Alvergue. She is survived by her sister Susan and her first cousin Wesley, both of Atlanta; her son George of Eugene; and her daughter Anne, her grandson Milo, and her son-in-law Michael, of New York.

Due to the pandemic, a celebration of life ceremony has been postponed to late 2021.

In lieu of flowers and to honor Flo’s life-long dedication to education, please donate to

To send flowers to the family or plant a tree in memory of Florence Alvergue, please visit Tribute Store

Share Your Memory of
Florence
Upload Your Memory View All Memories
Be the first to upload a memory!
Share A Memory
Send Flowers