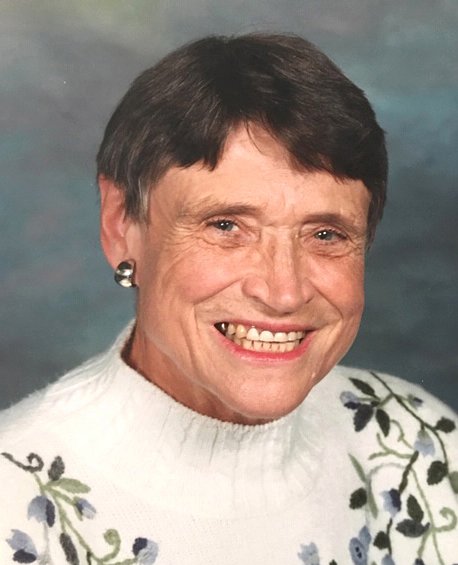 The Earth lost a beautiful soul when Mary Teresa (Devine) McKinney died peacefully September 16, 2020 in Eugene, Oregon at the age of 92. Mary was the much loved mother of seven, a grandmother, and an aunt. She will be missed dearly, and her legacy lives on through her family who deeply respected and honored her. Mary loved her family with a fierce and unconditional love, and they loved her for her courage, intelligence, strength, dignity and perseverance. Throughout her long life, she touched everyone with her kind, compassionate heart.

Mary was born in Las Vegas, New Mexico on August 26, 1928, the sixth of seven children of Richard Devine and Mary (Tipton) Devine. Her father had a career in banking and insurance. Her mother was from a prominent New Mexico pioneer family and was a talented pianist who attended the Julliard School in New York City. Although Mary’s family lived in town, she spent many happy hours at her maternal grandparents’ nearby ranch.

Mary was a firm believer in the power of education, beginning with her own at Immaculate Conception Parish School in Las Vegas, New Mexico. She continued at Mount de Chantal Visitation Academy Catholic girls’ school in Wheeling, West Virginia for her high school years. Mary returned to Las Vegas and attended New Mexico Highlands University, where she met and married Keith McKinney in 1948. Mary made sure that each of her seven children had the opportunity to attend college.

Shortly after marrying, Keith and Mary moved to Encino, New Mexico where Keith was a high school history teacher and basketball coach, and their first two children were born. They then lived in Roswell, New Mexico where three more children followed. In 1958, they loaded the kids into the car and moved to Weaverville, California, a small town located in the beautiful Trinity Alps of Northern California where their last two children were born. After nine years raising their family in that picturesque setting, in 1967 they moved to Eugene, Oregon where they built a new house. In 1980, Keith died unexpectedly of a heart attack, leaving Mary a widow at age 51. Mary resided in that home another 40 years until her recent passing.

Mary’s proudest accomplishment was raising her seven children, and her greatest desire and joy was for each child to fulfill his/her unique purpose and live a happy life. Mary delighted in spending time with family and hearing everyone’s news. She kept her big house so she could continue hosting countless family gatherings and providing delicious meals featuring recipes from her native New Mexico and many Thanksgiving turkeys and Easter hams. Mary’s eyes sparkled when she held her grandchildren when they were babies, and she took pride in their accomplishments as they became adults. Her many nieces and nephews will miss her thoughtfully handwritten notes that became treasures.

Many remember Mary’s grace and perseverance when life was hard. She was a woman of unshakeable faith in God, which she said gave her joy, peace and strength. She was a member of St. Mark Catholic Church in Eugene, Oregon for 53 years, where she contributed as a volunteer for decades. An accomplished pianist, as a young mother Mary was the organist for her church.

Mary will always be remembered for her beautiful smile and love of life. She had an inspiring

dedication to physical fitness and health. Mary was athletic since she was a young girl, growing up horseback riding, playing basketball, ice skating, and riding her bike on picnic adventures. From her sixties through her eighties, Mary was an enthusiastic member of a water aerobics class, which she attended three times a week with her friends. The group was well known at McDonalds for their post-workout teatime. Mary strode daily around the mile-long loop near her house with gusto regardless of the weather.

Mary was a lifelong lover of the outdoors. For more than 50 years in Oregon, she relished outings to the McKenzie River area and the Oregon coast. She enjoyed the companionship of her Springer Spaniels, having had four in succession. She particularly enjoyed taking them for weekly walks around the Willamette River and to trails in local hills. She always found special joy in the natural world.

Please do not send flowers. Instead, consider donating in Mary T. McKinney’s name to the American Cancer Society. Over the years, Mary lost many dear family members to cancer. Arrangements are entrusted to Musgrove Family Mortuary. You are invited to sign the guest book at musgroves.com

To send flowers to the family or plant a tree in memory of Mary McKinney, please visit Tribute Store

Share Your Memory of
Mary
Upload Your Memory View All Memories
Be the first to upload a memory!
Share A Memory
Send Flowers