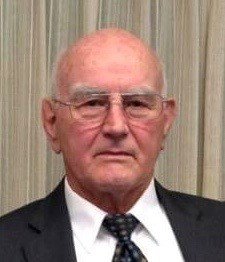 Charles (Chuck) was born on June 20, 1931 in Oskaloosa, Iowa to Walter and Ada Cora (Adams) Sullivan. They moved to Stockton, California when Chuck was 10 years old. Football was his passion, and he loved playing in high school and junior college. In December 1950, Chuck joined the Air Force where he served in the Korean War installing communication lines.

He joined The Church of Jesus Christ of Latter-Day Saints in 1955 and served a mission for the church in the West Mexican mission from 1960-1962, where he met his red-headed sweetheart, Renee. They married in 1964 in the Salt Lake City Temple and started their life together in Provo, Utah. Chuck earned his Bachelor’s Degree from BYU in 1966. Chuck and Renee later moved to San Leandro, California and then to Springfield, Oregon in 1969, where they raised seven wonderful children: Joseph, Sidney, Ann, Elizabeth, Rachel, Rebecca and Sara.

Chuck had a long career in the Springfield School District, where he was a wrestling and football coach, Spanish teacher and PE teacher.

Chuck was a loving, dedicated and hard-working father and husband. The family has great memories watching football games, going on family outings, swimming and eating corn on the cob and tomatoes. Chuck taught faith in Jesus Christ, how to work hard and to serve others. He had a strong relationship with his special-needs daughter, Elizabeth, and he often reminded others the blessing of having her in his family. He had a great sense of humor, loved tinkering in his workshop, and could fix almost anything. Chuck adored his wife of 56 years. He called her a pearl of great price and always said that she was the best thing that ever happened to him.

He was a stalwart member of his church, where he served in countless callings, including missionary, bishop, teacher, high councilor, home teacher, volunteer at the Bishop’s Storehouse and Girls Camp volunteer.  He found great purpose and joy in helping the members of his congregation in the Springfield 2nd Ward and the community.

Chuck is now reunited with his angel daughter, Elizabeth, and countless family members and friends. He is survived by his beautiful wife, Renee (Kearsley), six of his children, 25 grandchildren and 2 great-grandchildren, and his younger brother Max Sullivan.

A private memorial service for family members will be held Saturday, October 10, 2020 at 11:00am. A live broadcast of the service will be made available (check Facebook).

In lieu of flowers, please consider donating to a humanitarian cause in his name.

To send flowers to the family or plant a tree in memory of Charles Sullivan, please visit Tribute Store