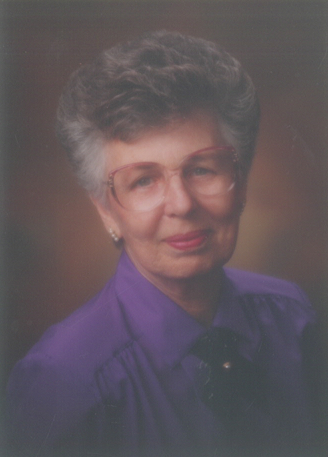 The second of five children, she was born June 26, 1920 in Colfax, Wash. to Guy Burnam and Agnes Keating.

She met the love of her life, John B. Meyer, in the orchards of Lewiston, Idaho, where his family had emigrated to pick fruit during the Great Depression. They were married on May 16, 1940 at St. Stanislas Catholic Church in Lewiston.

The family moved to Kennewick, Wash. in 1948 where John worked as a union carpenter on construction of Ice Harbor Dam and the Hanford Nuclear Reservation. The couple had six children: Larry, John, Carol, Kathy, Tony and Janet.

After John passed away from a heart attack at 41, the family moved to Clarkston, Wash., in 1959 where she took in ironing and worked in the cafeteria of Holy Family School.

Relocating to Reedsport in 1970, she worked in childcare and as a drug store clerk until retirement in 1986. She moved to Olive Plaza in Eugene where one of her great joys was watching the odometer roll over on the stationary bike that she rode religiously. She also enjoyed reading, playing canasta and watching her beloved Seattle Mariners.

A devout Catholic, she was a parishioner of St. Mary’s Church in Eugene and served as a Eucharistic Minister. She also was an active member of Catholic Daughters of America.

A lifelong Democrat, she was looking forward to voting in the upcoming presidential election.

Ruby was preceded in death by her siblings: Oran, Wayne, Mary and Agnes. She is survived by her children, 17 grandchildren, 22 great-grandchildren and 3 great-great grandchildren.

The family would like to thank Shalem Cottage in Springfield and Hospice of Sacred Heart for their excellent care and family support.

To send flowers to the family or plant a tree in memory of Ruby Meyer, please visit Tribute Store
Thursday
15
October

Share Your Memory of
Ruby
Upload Your Memory View All Memories
Be the first to upload a memory!
Share A Memory
Send Flowers