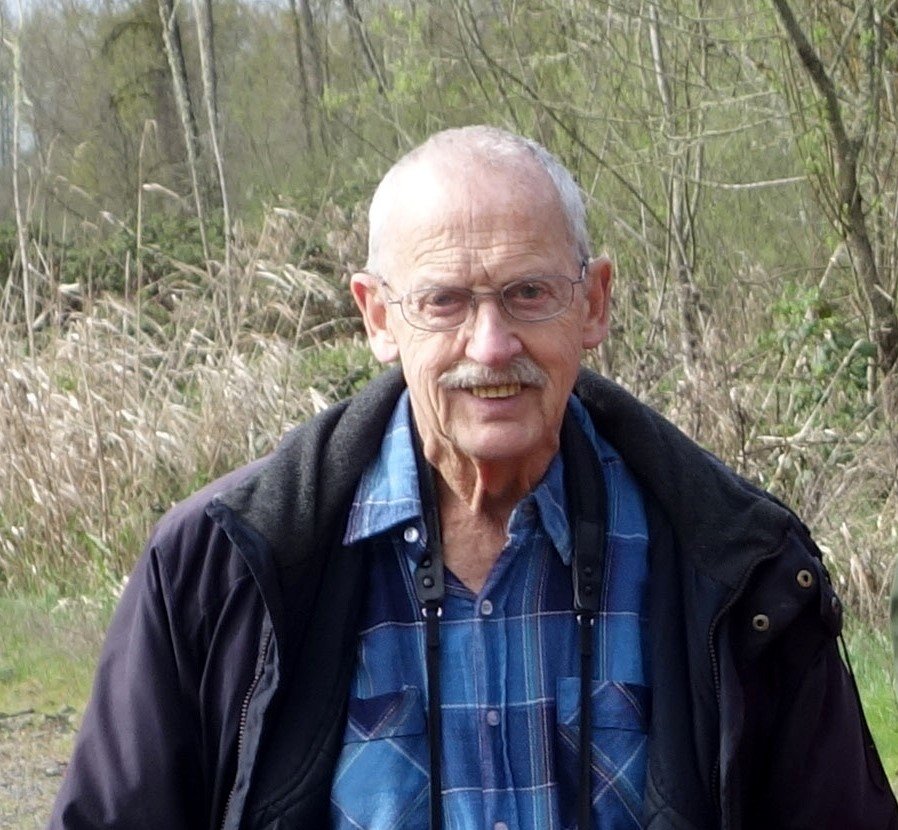 Born at home in Roseburg, Oregon in 1934, to Ernest and Eltie Brown, he was the youngest of 4 boys and 1 sister.  They moved to Eugene when he was two years old in 1936 and remained a lifelong resident of the area.

A 4th grade homework assignment sparked his interest in the birding world.  At the age of 12, he created his own nature museum in a barn, filled with taxidermy birds and mammals. They were displayed in glass cases that his mom bought for him from a neighborhood store that went out of business.  Multiple nearby elementary school classes and a high school biology class as well as individuals would tour this collection.  He gave it up after rats damaged the display when he was 15.

He was part of the last graduating class from Eugene High on Lincoln Street, in 1953.

He married Joyce Kerns in August of 1956, and was drafted into the Army three weeks later.  He served as an MP at Fort Lawton in Seattle, WA, which is now Discovery Park.

He began working at EWEB as a meter reader in 1963, and worked in that department for about 23 years before transitioning to the warehouse.  Retiring in 1993, he had worked a total of 30 years for the company.

Joyce had to move to a care facility in Feb of 2007 due to Mixed Connective Tissue Disease.  David faithfully visited her every day, and befriended many of the other residents and staff at the facility. After Joyce passed away in March 2009, he continued his visitations to the facility, eventually winning the heart of one of the residents, Jirina Nelson. They were married four years before she passed in Feb of 2015.

He enjoyed fishing, hunting, and camping, but his favorite hobby was birding.  He could look at a feather and tell you all about the bird it came from, or identify a bird in flight far in the distance.

He was well known in the birding community and was considered the Dean of the Willamette Valley birders, and was written up in several of the Lane County Birding books, plus one that is due out in October.

Preceded in death by Joyce and his son Ricky, his siblings, and Jirina.

He is survived by his daughter, Judy (Craig) Peters, and grandchildren Casey (Evan) Hough and Reggie (Ashley) Peters, along with numerous nieces and nephews.

Special thanks to the staff at RiverRun Place and Signature Hospice for the incredible care and support they provided.

Share Your Memory of
Dave
Upload Your Memory View All Memories
Be the first to upload a memory!