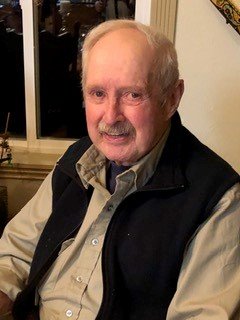 Jupe Holm of Junction City passed away July 1, 2020 at the age of 96. Jupe was born in Junction City to Niels and Lola (Spickler) Holm. He graduated from Junction City High School in 1941. On March 11, 1945, he married the love of his life, Marilyn Yvonne Hentze, to whom he proudly told people that they were married for 72 years before her death in 2017. Together they raised two sons, Richard and Gary.

Jupe enjoyed playing cards, billiards, bowling, hunting and fishing, camping, spending time with his wife and children at the coast, and traveling Oregon, especially Eastern Oregon, with family and friends.

Jupe began farming as a young man on his grandfather’s farm West of Junction City. Over time he started acquiring parts of his grandfathers’ farm and eventually grew his own farm into the farm it is today. Jupe farmed with his son Gary until Jupe retired on paper then spent the next twenty years farming with his son as needed.

Jupe primarily considered himself a Grass seed farmer. Along with many grass seed varieties, he also grew other crops, Peppermint, Grains, Sugar Beets, Radish, and many others throughout the years.

Jupe enjoyed serving his community by being a part of several organizations, Junction City School Board Budget Committee, The Oregon Ryegrass Commission and Orchard grass Board, and the A.S.C.S. Community Committee. He was honored to be selected as North Lane Soil and Water Conservation Farmer of the Year for 1973.

Jupe spent 75 years on his farm enjoying and caring for the land. He is preceded in death by his wife Marilyn and son Richard. He is survived by his son Gary and daughter in law Carol; grandchildren Magan, Caleb, Jason, Mandy, Jessica, and Katelyn; great grandchildren Devlin, Rikki, Dakota, Wyatt, Colton, Ava, Bentley, Clara, Carter, and Hudson whom Jupe liked to call ‘lil Jupe.

A special thank you goes out to Kathryn’s Care for her years of service to the family and Peace Health Hospice. Donations may be made to Peace Health Hospice Children’s Grief Program.
A graveside service was held July 7 at Rest Lawn Cemetery. Arrangements were entrusted to Murphy Musgrove Mortuary.

To send flowers to the family or plant a tree in memory of Jupe Holm, please visit Tribute Store

Share Your Memory of
Jupe
Upload Your Memory View All Memories
Be the first to upload a memory!
Share A Memory
Send Flowers