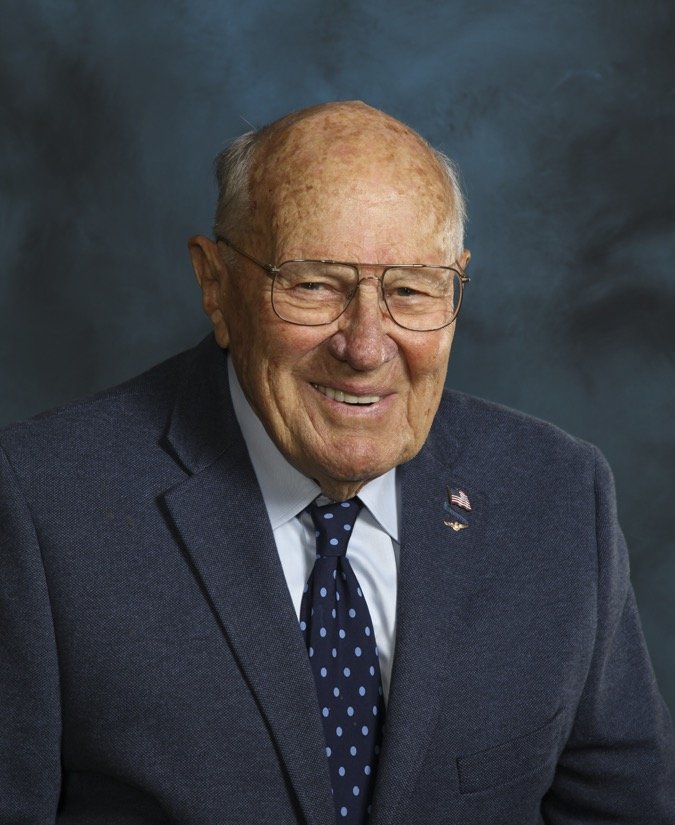 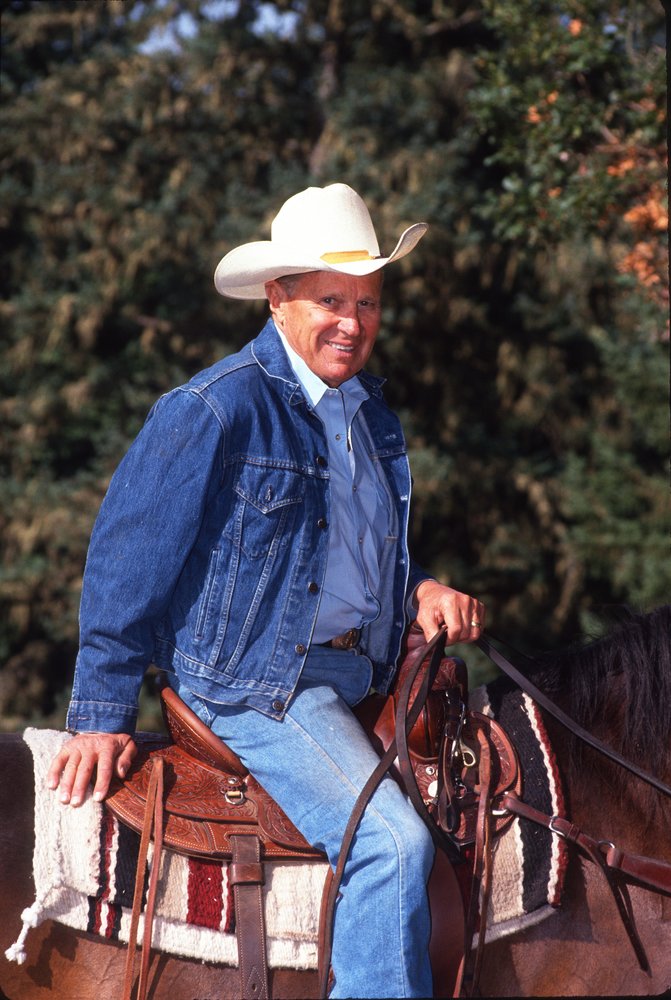 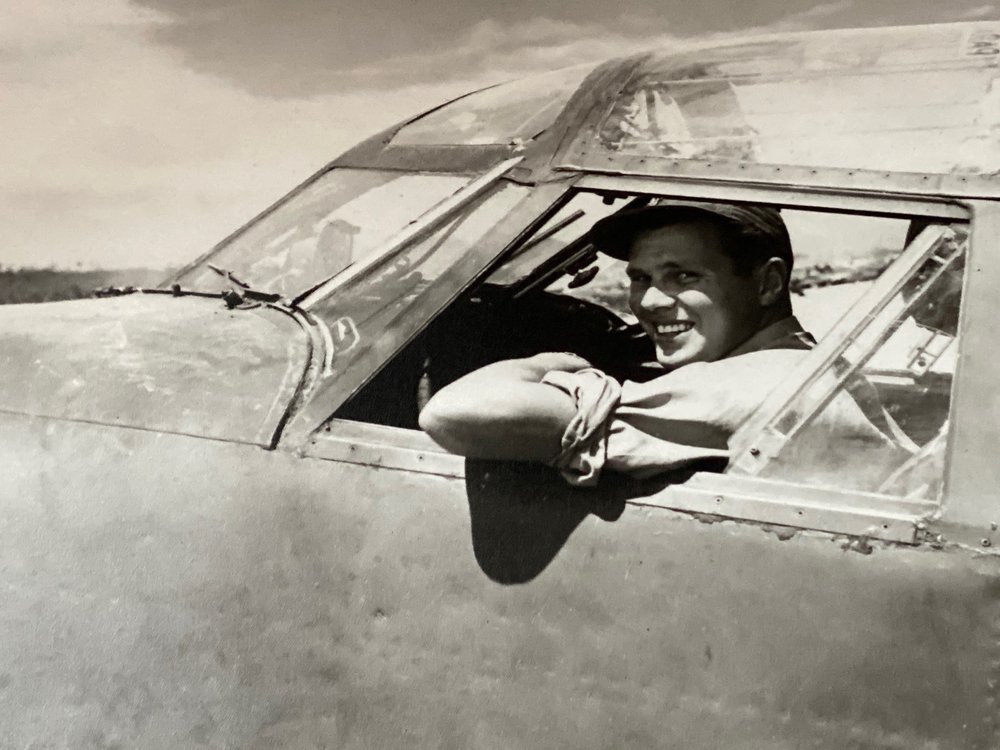 Ehrman Vincent Giustina, a decorated World War II Naval aviator who went on to leave an indelible mark on western Oregon’s wood products industry and will long be remembered for his devotion to his family, community and country, died June 21, 2020 surrounded by family members. He was 99.

Giustina was a retired, second-generation wood products entrepreneur. With his older brother Natale “Nat” Giustina, Ehrman helped transition lumber mills that were founded by his father and three uncles into what is now a pair of family-owned companies with extensive timber holdings and real estate investments.

Giustina was born July 19, 1920, at St. Vincent Hospital in Portland, Ore., the second son of Erminio and Irene Onorato Giustina. In addition to being his birthplace, St. Vincent Hospital also provided Ehrman’s parents with the inspiration for his middle name, Vincent. Erminio Giustina and three of his brothers had emigrated from the San Vito di Cadore area in the Italian Dolomite Alps during the early 1900s, and in 1917 bought a small mill in Mollala, Ore. In 1923, the Giustinas moved to Lane County, Oregon, where they purchased a sawmill in Lost Creek Valley, east of Eugene. The Giustina brothers moved to Eugene with the purchase of a larger sawmill and planing mill in 1934. Eventually the brothers’ operation included a green veneer plant, a stud mill, retail yard and plywood plant. Several years ago, the Giustina Bros. Lumber and Plywood Company was divided into Giustina Resources and Giustina Land and Timber.

The courage and sacrifices of his immigrant parents and relatives left a powerful and enduring impression on Ehrman Giustina. “These people, the ones who came from the old country and landed here with a suit of clothes and maybe a five-dollar bill, had guts,” Giustina said in a 1985 family biography. “Sometimes I compare them to the pioneers who walked across the plains, the deserts and the mountains to the West. They were hungry for a better life, they were highly motivated, they were consumed by the work ethic, but they also had just sheer courage, to get out there and battle against really enormous odds. I’m very proud of that generation.”

Giustina himself demonstrated the courage he so admired in his parents as a decorated World War II Naval aviator, earning both the Distinguished Flying Cross and the Air Medal in 1944. He was one of the youngest Naval aviators ever to command his own bomber, a twin-engine PV-1 Lockheed Ventura.

Giustina once guided the heavy aircraft home safely on just one engine at night over miles of open ocean, after ordering his crew to throw overboard every non-essential item in the plane, right down to the seats.

Eight months after earning his wings in the Navy, Ehrman married Marion Lee Barlow on May 2, 1943. They were married for 66 years. She died July 21, 2009, at the age of 88. Ehrman and Lee had four sons and a daughter: Edward Nicholas (Nick), Ehrman Danell (Dan), Gregory Lee, Gennifer and Thomas Anthony.

Though service to his country interrupted his education at the University of Oregon just a few months before he would have graduated with a degree in Business Administration, Giustina remained a staunch supporter and major donor to the UO throughout his life. He received the UO Presidential Medal in 1996, the UO Distinguished Service Award in 1989, and the UO Pioneer Award in 1970. He was a UO Foundation President from 1981-83, a Foundation Trustee from 1966-1994, a Foundation Trustee Emeritus since 1998 and a member of the Arnold Bennett Hall Legacy Society.

Giustina’s commitment to his community was equally strong and included leadership roles with the Eugene Water & Electric Board, United Appeal, Eugene Arts Foundation, Keep Oregon Green Foundation, Eugene Chamber of Commerce, Oregon Department of Land Conservation and Development Commission, American Plywood Association and the Associated Oregon Industries Board. He was a lifetime member of the Oregon Track Club, and a member of the Oregon State Board of Forestry, Pleasant Hill School Board, Plywood Pioneers Association, Friends of the Museum Board of Governors, Eugene Airport Commission, Lane County Health Association and the University Club of Portland.

Giustina’s success and innovation in the family forest products business paved the way for the civic contributions and philanthropy for which he was known. The Giustina family were pioneers in sustainable forestry. Instead of following the common practice of letting logged timberland regenerate naturally, the company began planting seedlings on their timberland. In 1944, the Giustina family’s efforts were recognized when they received one of the earliest designations as a nationally certified American Tree Farm System tree farm.

“The UO family has lost a special friend. Ehrman leaves behind a legacy of extraordinary generosity. He gave his time, talents, and resources to UO, while also giving back to our community and the state of Oregon. We grieve with his family and will be forever grateful for his wisdom, commitment to our students, and his genuine affection for the university.”  – UO President Michael Schill

“We feel blessed by our father’s presence in our lives and inspired by the example he provided of devotion to his family, and service to his community and country. To know him was to understand why his was called the Greatest Generation.” - Dan Giustina, son and managing partner of Giustina Resources

Ehrman Giustina is survived by four sons and a daughter, Nick of Portland, Dan of Eugene, Greg of Thailand, Gennifer of Denver and Tom of Sacramento; four grandchildren and three great-grandchildren.

A private interment is scheduled.  A Memorial Celebration of Life will be announced at a later date. Arrangements entrusted to Musgrove Family Mortuary. Please access the obituary and you are invited to sign the guestbook at musgroves. com.

To send flowers to the family or plant a tree in memory of Ehrman Giustina, please visit Tribute Store

Share Your Memory of
Ehrman
Upload Your Memory View All Memories
Be the first to upload a memory!
Share A Memory
Send Flowers