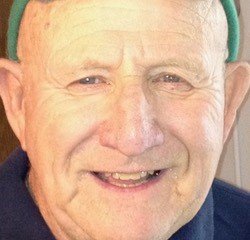 Robert “Bob” Davis, a longtime resident of Eugene, Oregon, passed away peacefully at home with family on June 21, 2020 at the age of 88. Born in Liberal, Kansas, the family of 8 later moved to Livingston, Montana where he graduated from high school in 1950. He served in the United States Air Force and attended Western Washington University and worked for several years at Boeing before spending the remainder of his career at State Farm Insurance in Oregon.

Bob retained his love of aviation while owning a Cessna plane for many years and then mastering computer flight simulation.  Bob had lifelong interests in woodworking, gardening, travel, and snow birding in Parker, Arizona. After retirement, he enjoyed many years with his trusty beagle named Arthur.  Bob was always the ‘helping hand’ with a kind and generous spirit to friends and neighbors.  Most importantly, Bob was a loving and doting husband, father, grandparent and great grandparent with his family.

Bob is survived by his loving wife of 39 years, Betty Anne Davis; brother and sister-in-law Gary and Allene Davis of Lyndon, WA; daughter and son-in-law, Kelli and Mike McSherry of Seattle, WA; step-son and daughter-in-law, Pat and Priscilla Richardson of Lake Oswego; and step-daughter and son-in-law, Catherine Richardson and Chuck Katter of Portland. His surviving grandchildren include Finn, Daley, Sarah, Spencer, Angela, Hugh, Grace and Palmer and great-grandchildren Tyler and Jaymes. He is preceded in death by step-son Andy Richardson, brothers Eugene Davis, Dwight Davis, and sisters Eloise Meads and Pauline Crosby.

A memorial service will be held on Saturday, June 27th at 10:30am at West Lawn Memorial Park, 225 S. Danebo Ave. in Eugene followed by his burial at 2:00pm at Belcrest Memorial Park in Salem.
Arrangements entrusted to Musgrove Family Mortuary. Please access the obituary and you are invited to sign the guestbook at musgroves.com.

To send flowers to the family or plant a tree in memory of Robert Davis, please visit Tribute Store