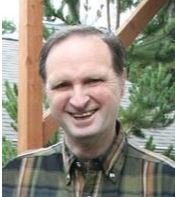 On Tuesday, June 16, Luther M. Bergerson Jr., husband, father, and grandfather, passed away from complications of his Parkinson's Disease at 79 years of age.
He is survived by his wife Nancy Faye Taylor-Bergerson, his daughter Char Witmer, her husband Rob and their daughter, Taylor, his daughter Jayna Bergerson, his brothers Ben and Tom Bergerson, and his sisters Jeanette Bergerson and Phyllis Benson.
Luther was born in Rapid City, South Dakota, to Luther and RobAnnEtta Bergerson. Six months later, they relocated to Springfield, Oregon. The oldest of seven children, Luther enjoyed carpentry from an early age. In adulthood, he could build anything from bunk beds for his daughters to an addition on his house. He also loved music and had perfect pitch. First, he learned the trombone and ultimately taught himself how to play the organ.
He served in the U.S. Marine Corps for over four years as an assistant chaplain and truck driver instructor. He was stationed in Camp Pendleton and Okinawa, Japan, and was awarded the Good Conduct Medal and marksmanship awards. After returning home, he married Nancy Fay Taylor on Oct 28, 1973.
Luther was a man of deep faith and devoted his life to serving in his local church, Goshen Assembly of God. He volunteered as a deacon, bus driver, organist, and much more. He was passionate about helping others and, through the years, opened his home to more than 25 people who needed a place to stay. He leaves behind a true legacy of generosity, kindness, and joy.
A virtual memorial service will be held on Saturday, June 20 at 11am. See https://www.facebook.com/events/705708013333113/ for more information.
In lieu of flowers, donations can be made to The Michael J. Fox Foundation for Parkinson's Research.

To send flowers to the family or plant a tree in memory of Luther Bergerson Jr., please visit Tribute Store

Share Your Memory of
Luther
Upload Your Memory View All Memories
Be the first to upload a memory!
Share A Memory
Send Flowers