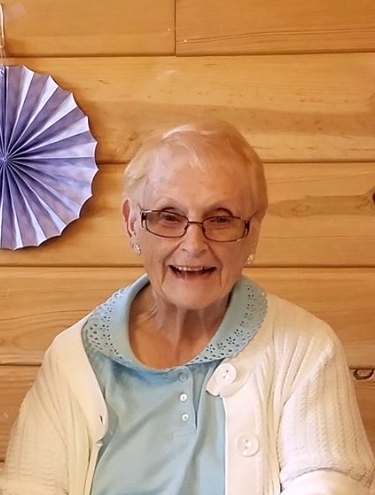 LaVaun Thompson, (known to most as “Bonnie”) was born on July 25, 1927 around noon in Dysart, Iowa to her proud parents, Wilbur Clay Corcran and Cora Anne (Fowler) Corcran.

She had seven brothers and three sisters. She grew up mostly in Dysart and graduated high school in 1945.

Bonnie married her first husband, Vern Clemann, in 1945 and they had two daughters, Connie Ann and Terri Kae. Vern passed away from cancer in September 1960.

Clayton and Bonnie were married June 11, 1965 and remained married for 52 years before Clayton passed away in August of 2017.

Kimberly Jean was born in 1966 making a grand total of 6 children.

In 1967 they decided to move the family from Iowa to Oregon. They purchased a home in Eugene, Oregon.  Bonnie was a beautician and eventually they made the master bedroom into a beauty shop, the “Curl Inn.” Mom ran her shop for many years.

They lived in the same house until Clayton passed away in 2017. At that time, Bonnie went to live with her daughter and son-in-law, Terri and Jim Lowery, and remained with them until her passing on June 15, 2020. June 15th was Clayton’s birthday.

Mom loved gospel and western music, her family, and her home. Her proudest civic accomplishment was her involvement in her church, Trinity United Methodist.  She often said: “My family is my life commitment.” This embodied Bonnie’s life.

She is predeceased by her husband Vern, daughter Connie in 2012, husband Clayton, son Craig in 2020, and 9 brothers and sisters.

She will always be loved and missed.

Share Your Memory of
LaVaun
Upload Your Memory View All Memories
Be the first to upload a memory!