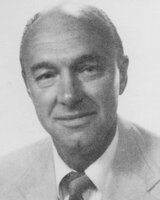 A memorial service will be held at 2:00pm, Saturday, December 3rd, at the First United Methodist Church in Eugene, OR for Norval James Ritchey, former University of Oregon athletic director (1970 -75).  Norv died November 2nd of age-related causes at the age of 90.

Norv was born in Scotts Valley, OR on December 30, 1931 to Claude and Pearl (Cox) Ritchey, and lived there until graduating from Yoncalla High School.  That Fall, at age 16, he enrolled at the University of Oregon, where he lettered playing baseball (catcher), joined the Sigma Nu fraternity, worked as a houseboy, and joined the US Air Force ROTC. After graduation, Norv was drafted by the (then) Brooklyn Dodgers baseball club and played on one of its minor league teams for 3 months before being called to active duty in the US Air Force during the Korean War.  He remained in the active reserves of the Air Force until 1991, attaining the rank of Colonel and serving as an Admissions Liaison Officer to the US Air Force Military Academy for 8 years.

He married Mary LaDon Wells in Roseburg, OR on May 14, 1955. At that time, Norv was serving in the Air Force where he was assigned to the 5th Air Force headquarters in Nagoya, Japan.  Upon landing in Japan on his way to Korea, the base commander changed Norv’s orders to keep him in Nagoya to serve as player/coach for the baseball team, and fill the role of base activities officer.  Mary joined him in Japan and served as executive secretary to the Base Commander for nearly two years.
Norv returned to Springfield, OR with the intent of completing his Master’s Degree in Physical Education at the UO, and then finding a position as a high school coach.  He did complete his degree, but his plan of becoming a high school coach was changed when he was hired by UO Athletic Director Leo Harris to be the freshman baseball coach and athletics fund-raiser.   Norv dedicated almost 20 years to the UO Athletic Department, culminating with him serving as Athletic Director from 1970 through 1975.  He then spent another 17 years as the assistant dean of the UO’s Health, Physical Education, and Recreation (HPER) department before retiring in 1992.

Norv was a 65-year member of the United Methodist Church in downtown Eugene, OR and was deeply involved in many activities there, including serving on the building committee that built the current building on Olive Street.  He also stayed involved with youth baseball, providing important support for local American Legion and Babe Ruth organizations.  He was instrumental in the fund-raising and construction of the Ted Norman Memorial Baseball Complex in west Eugene.

Always a good athlete, Norv played a serious game of racquetball well into his 70’s.  He was also a private pilot, rated to fly both single and twin-engine aircraft, and truly enjoyed being in the cockpit piloting and co-piloting with his “flying buddies”. Another of Norv’s recreational and family joys was a log cabin on Odell Lake that he and Mary owned for over 40 years.

Some of Norv’s local and national accomplishments:

Norv and Mary (deceased in 2012) were married for 57 years, and were the proud parents of Mike (Deb) of Eugene, Doug (Dorothy) of Bend, and Rayna (Brett) Evert, also of Bend. Norv was also a loving grandfather to Cameron and Caitlin Ritchey; Emily and Ben Ritchey; and Ashley Hawkins, Christina Sampson, and Alexa Evert. And in just the past two years, Norv became a great-grandpa with the births of Roman and Coco.

In 2013, Norv was fortunate to find a second love of his life, Barbara J. Malos. They were married in 2014 and enjoyed keeping each other young.  Barbara and her family (daughter Pamela Cadwalader and granddaughter Carrie Cordell) were wonderful additions to Norv’s life, and provided much loving support to him.

Norv was an only child, and was predeceased by his father (Claude), mother (Pearl Lunney), step-father Walt Lunney, and first wife, Mary.

His kindness, enthusiasm, optimism, and compassion will live in the hearts of his family and friends forever.

The family would like to express its sincere and heart-felt thanks to the staff at Waterford Grand Memory Care during the past 3 years. Norv and the family greatly benefited from their support, care, and compassion during a particularly challenging time.
Arrangements by Musgrove Mortuary in Eugene. In lieu of flowers, the family suggests remembrances to the First United Methodist Church (1276 Olive, Eugene, OR 97401), the University of Oregon baseball program, or your favorite charity.