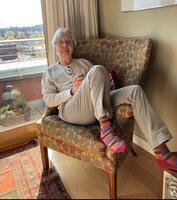 Sarah (Sally) Spicer Weston died at home on Saturday morning, May 14, of heart failure. Her spouse and 70-year companion Jim was with her when she died.

Sally was born June 29, 1934. Her natal family lived in small college towns in New York and Ohio before moving to Arlington, Virginia in time for Sally’s senior year of high school. In that vastly larger population Sally found one good friend, the French horn player behind her, who tipped her chair while she was wetting her oboe reed. In due time she married him, and with him she lived, traveled widely, reared children, and, most notably, built community.

Since her arrival in 1970, Sally served Lane County in countless ways. She was one-time president and long-time volunteer with the League of Women Voters of Lane County. She was Fairmount Neighbors president; LCC Budget Committee member; and state governor’s appointee to the Lane County Local Government Boundary Commission, which she chaired. She was a member of the Eugene Performing Arts Center Committee during its fund-raising stage, then chaired the citizen’s commission to oversee design, construction, and administration of the Hult Center. She chaired the Oregon Chamber Music Society (UO). She was a founding member of the City Club of Eugene and chaired its Program Committee. She was one of the six women who planned, financed, and oversaw the construction of the Tate Condominium in downtown Eugene. She volunteered with Birth to Three, and with the SMART program as soon as it launched, where she was a devoted reader to 4-J children for more than 25 years. Between local community gigs she traveled and lived abroad in Europe, Asia, Africa, Central and South America, and the Middle East.

And yet none of these accomplishments explains why so many people loved and admired Sally. Sally was elegant: always slightly overdressed, everywhere she went. She was poised, even when confronted by deranged strangers. She was dignified, even when she laughed until tears rolled down her face. And she was assertive, courageous, and kind.

Sally is survived by her high school sweetheart, James A. Weston, Emeritus Professor of Biology at the University of Oregon; daughter Elisabeth Paige Weston (Laurence Mate) of Champaign, Illinois; son Jonathan Samuel Weston of San Francisco; and two grandchildren to whom she will always be Radical Granny: Rosamond Mate (William Hughes) and Samuel Mate (Rachel Perry) of Denver.

A memorial service will be held in the future. For friends who are moved to make a charitable donation in Sally’s honor, her family suggests The League of Women Voters, Birth to Three, or any local performing arts organization.