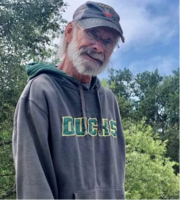 After graduating Villa Park High School in 1971 Mike joined the US Navy.

While in the Navy he was stationed in Guam where he married his high school sweetheart, Debbie Ray in Feb 1971.

Shortly after getting married Mike was then stationed on multiple naval destroyers out of San Diego, CA.

In 1974 his daughter Robin was born. But being in the middle of a West Pac Tour, they didn’t meet until

she was 3 months old.  Mike completed numerous West Pac Tours until he completed his service in 1979.

During his service he received a Good Conduct Medal and Two National Defense Medals.

After his military career he traveled and did various jobs for a few years until he met Shari Dixon.

They married in November 1998.  Mike drove for Swift Trucking and Shari rode with him for a few years,

having many adventures.  While married they lived in California and Arizona.

Mike moved to the Eugene Oregon area where he drove truck for a local business.

He had numerous great friends he called his brothers.

They had many great times golfing, fishing, camping or just hanging out.

Mike got a new puppy in 2016. Mike and Rex were best friends and went everywhere together.

When Mike retired, he moved to Cottage Grove.

He enjoyed working on his Hornet and golfing when he wasn’t traveling with Rex visiting family and friends.

Mike was preceded in death by his Parents Jeffery, Penny, and John, Uncle Charlie,

Brother David, and his Granddaughter Caitlin.

He is survived by his Daughter/ Son in Law Robin and Jason.  Grandchildren Zac, and Emily.

and his “bro’s” Chris and Mark and many wonderful friends.

A Celebration of Life will be held Saturday May 21, 2022 at 3 PM at the Hidden Valley Golf Course in Cottage Grove, OR.

(Please park at the Elks Lodge).

Please join us in celebrating and sharing memories of Mike

and remembering the kind man he was.