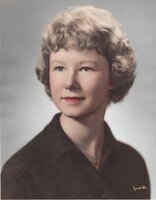 Ilona Mary Johnson passed away on February 28th, 2022 in Eugene, OR at the age of 79. She was born in Astoria, Oregon, March 9th, 1942 to Uno and Mary Salminen. She was raised in Gearhart, Oregon and graduated from Seaside High School in 1960. She attended Oregon State University and was a proud member of the Delta Gamma sorority. On Christmas Day, 1961, she married Steve Johnson. They would go on to have two children, Eric and Maija. In 1967, the family moved to Eugene, Oregon, where she earned her real estate license and worked many years for Rams, Sagen Company and Cougill & Hansen Realtors.
She enjoyed the company of her friends and family, painting, quilting and hosting family gatherings on holidays, whipping up exquisite dinners with all the fixings and sending guests home with full bellies and arms full of leftovers and homemade desserts. She was a lifelong Christian and loved to attend worship at Central Lutheran Church, especially on holidays. She loved attending her grandchildren's sporting events and activities, always being their biggest cheerleader and greatest supporter. She was staunchly proud of her Finnish heritage and taught her children and grandchildren to live by the concept of sisu. After her retirement, she finally fulfilled her lifelong dream of visiting Finland, a trip which she would remember fondly for the rest of her life.
She was preceded in death by her husband, Steve Johnson, her father Uno Salminen and her mother, Mary Salminen. She is survived by her son Eric Johnson (Suzie Johnson), daughter Maija Anderson (Tim Anderson) and her grandchildren Liisa, Ben and Jordin, who affectionately referred to her as "Mimi".
A celebration of life will be held Saturday, March 26th, 2022 at 2:00pm. It will take place at Central Lutheran Church in Eugene, Oregon. In lieu of flowers, donations may be made to Central Lutheran Church or Kidsports of Eugene, OR.