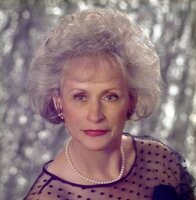 No one came away from an encounter with Donna Leigh Basye Fryburg without a strong impression.

Those traits came from some very tough times, hard work, and a high IQ. Donna grew up poor in Seattle, the youngest of four children in the Park family. Her mother died when she was only four. Her father never remarried. Donna’s early marriages were tough too, but they produced four children: Philip Poole (who preceded her in death), Leigh Ann Freeman, Diane Pomerantz, and Kenneth Poole, Jr., leading to multiple grandchildren and great grandchildren.

Things turned around for an impressive final 50 years. Donna’s good friend, the late U.S. District Judge Helen Frye, introduced her to the first of two wonderful men, Wendell Basye, Dean of the University of Oregon Law School. Their marriage, which began in 1971, included a year at the US Military Academy at West Point and ownership of three race horses. Wendell passed in 1985.

Judge Frye also introduced Donna to Russ Fryburg, a Eugene lumber industry leader. They were married from 1994 until his death in early 2020. They loved the Eugene Country Club, where they were often the oldest golf-playing members. Donna called the Club “our living room.”

However, Donna never hesitated to take on hard jobs when she had to, including years as a surgical secretary at Sacred Heart.

Donna showed her warrior spirit, and amazing energy for a woman in her late 80’s and 90’s, as she gave full-time care to Russ at home, and then, until Donna passed, to her daughter Leigh Ann.

Donna was passionate about animals. “Love me. Love my dog,” hung on the living room wall. One of her last wishes to those who wish to honor her – “Please give to an animal charity in my name.”

Donna also enjoyed good clothes, good scotch and a good argument, which often left one thinking she had won.

Donna called her son, Phil, a retired Navy Commander living in Idaho, her “best friend.”
His unexpected death in October was a body slam. Donna, at age 91, then bounced back to move daughter Leigh Ann from Illinois to Donna’s home in south Eugene. Given her energy level and determination, Donna’s death was also unexpected.