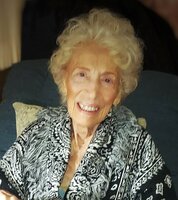 Rev. Doris F. Hunt died Dec. 5, 2021 just 1 week shy of her 100th Birthday and on her husband’s birthday. She was with those she loved and who loved her as she passed from this life to the next.
Doris was born Dec 14, 1921 in Bostwick NE. to William and Emma Herman, the youngest of 9. At a young age her family moved to Des Moines IA, where she lived for 60+ years. That is where she met and married the love of her life Ted Hunt on Dec 7, 1940.
In her mid 40’s Doris felt called to go to college. She attended Drake University and earned a BA in Music with a Major in Sacred Music, followed by a Master’s degree in Music Education. She starred in several Operas at Drake University and went on to teach voice and piano at the Open Bible College in Des Moines IA, where she eventually became the Director of Music. She received her Pastoral Ordination from the Open Bible Churches in 1973 and maintained that ordination her entire life.
Doris started and directed many musical groups and led choral tours across the country. She also toured internationally with her eldest brother Hal Herman, where she was the featured soloist at Hal’s multi-thousand-person tent evangelism meetings around the world. She had a beautiful Soprano Opera voice.
Doris and Ted moved to Eugene Oregon in 1986, at the age of 64 when most people are thinking about retirement, she accepted the job as Director of Music at what was then the Eugene Bible College, now New Hope College. She retired from that position in 2012 at the age of 90. She continued teaching private voice and piano lessons in her home for another 6 years. She also mentored many young ladies at Teen Challenge’s Hannah’s house.
Many of her former students have remained in contact and have often told how they received the best voice lessons they have ever had from Doris. Many female students have remarked that it was Doris’s loving encouragement that kept them focused on finishing school when they felt like giving up. Her passions were Her Lord Jesus, Family, Friends and Music. Her love, mentorship and generosity have blessed and enriched the lives of so many.
She is survived by daughter-in-law Barbara Hunt, grandchildren Heidi Harmon, Maranda Hunt and Dustin Hunt, 5 great-grandchildren, and God-daughter Kristi Moomey. Doris was preceded in death by her husband Robert “Teddy” Hunt, her 8 siblings, both of her children Janice Vogel and William Hunt, and grandson Jeremy Vogel.
Services will be at New Hope Christian College 2155 Bailey Hill Rd, Eugene, OR 97405, on Monday December 20th at 2pm. (viewing at 1:30 pm). Private burial will be at Rest Haven Memorial Park on Tuesday. Memorial contributions may be made to New Hope College, Eugene Oregon. Musgrove Family Mortuary is handling arrangements.