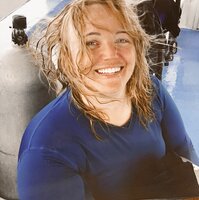 Joye Ilene Nuckolls was a loving wife, mother, sister, friend, and nurse who left this world abruptly October 1st, 2021. Joye was born on a warm dry April day in 1973 to Gerald and Carolyn Schwartz in Eugene, Oregon.  She was the youngest of their four children and the only girl. Needless to say, she immediately held special sway in the family dynamic. The family was close, mainly due to the 900 square foot home they shared. The lot was big, though, and had a large back yard where Joye and her brothers could play and help in the garden. Being the youngest, Joye was always laughing and trying to keep up with the boys. She learned how to be tough, assertive, and tenacious. Some might call it stubborn.

Despite her toughness, she always smiled a beautiful genuine smile befitting of her name. The family moved several times as Jerry worked to provide for the family, especially his little girl. First to a subsistence farm in the Veneta area where Joye and her brother Matt chased the chickens and brought in eggs and helped in an even bigger garden. For a while, she attended a three room K-8 schoolhouse in Toketee Falls, Douglas County, Oregon.  The family eventually ended up back in Eugene, and Joye competed in sports at Cascade Middle School and graduated from Willamette High Class of 1991. She attended Lane Community College and was enrolled in the dental program. At LCC she met the boy, the one, her future husband Jeff Nuckolls. The couple was married the following year in 1992. The next year they welcomed a daughter. Tenacious as ever, Joye finished her education, raised a baby, and worked as a dental assistant. When their son was born Joye decided to spend more time at home and opened a licensed day care where she could raise her two children while helping to provide for the family.

Eventually as the kids grew she returned to school and became a Registered Nurse. Caring for others was always a part of her nature, and nursing was her calling. She cared for those in need in demanding specialties for a total of 15 years. Some of those specialties included oncology, medical surgical and psychiatrics. Joye made an impact wherever she went, bringing laugher and joy into any situation. Aside from her immense impact in the nursing field, she also raised a beautiful family with her husband Jeff. They became grandparents only a few short years ago. Joye loved her kids and husband with a fiery passion and loved her grandkids just the same. Only in a few short years she taught lifelong lessons to her grand babies. She fought fiercely for those she loved and brought abounding smiles and laughter wherever she went. Her absence in this world will be felt for years to come, and this world will seem darker without her illuminating presence around us all.

Her memorial service will be held at Creekside Farm in Harrisburg, OR on October 24th, 2021 at 1pm. Arrangements with Murphy Musgrove Funeral Home in Junction City, OR.