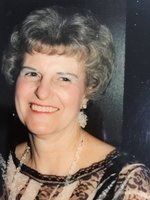 Wilmajean Grace (Lovell) Funken passed away on Thursday, December 24, 2020 in Eugene, OR at the age of 95. She was born August 1, 1925 in Terre Haute, IN to Gale and Carrie Lovell.  She graduated from Lakeview HS, Chicago, IL.  Wilmajean, or "Jeanne" as she liked to be called was married to Konrad Lee Funken for 64 years.  She worked for Busch Jewelers and later for Peter Paul Candy Company as executive secretary while living in Chicago.

Jeanne spent the majority of her life in Chicago with her husband and son where she enjoyed entertaining family and friends.

Jeanne and Konrad retired to Eugene, OR where she was a member of Nydia Temple Daughter's of the Nile.
She was preceded in death by her beloved husband Konrad, her sister Helen (Lovell) Shampine, and her brother Robert Lovell.

Jeanne is survived by her son Lee and his wife Rosemary, their children Laura, Melanie, and John and her great grandchildren Evan, Sadie, Myles, Asher, and Annabelle and her niece Patricia (Funken) Gilstrap and nephew Ward Shampine.

In lieu of flowers Jeanne has requested that donations be made to the Portland Shriners Children's Hospital.  An online celebration of life will be held in the near future.