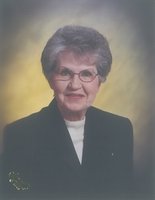 Sue Rose Smith passed away September 8, 2020. She was born in Rosboro, Arkansas to Elzey Ray and Kate Rose on June 25, 1931. The family moved to Springfield, Oregon when she was 10 years old. She graduated from Springfield High School and later married Robert Smith in 1951. Bob and Sue were married for 67 years prior to Bob's passing in 2019. They were members of Trinity Baptist Church for over 70 years. Her faith was an integral part of her life. Sue adored her family and friends and was adored by them.
Sue was preceded in death by her husband, her parents, and sister Deanna Henshen. She is survived by daughters Debbi Kuhn (Paul), Roxanne Smith, three grandsons, Jon Kuhn, Steve Kuhn, and Zach Smith, eight great-grandchildren, and brother Dan Rose.
The family asks that any memorial contributions be made to Trinity Baptist Church in Springfield, Oregon.
Arrangements entrusted to Springfield Memorial Funeral Home.