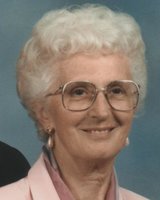 Arlene Roberta Cox, daughter of Robert Cox and Mabel Rae Cunningham Cox, was born in Eugene, OR, September 11, 1920 and raised on the family Donation Land Claim along the Long Tom River at the base of Cox Butte near Junction City, OR. Arlene was a fourth generation Oregonian and DAR member, descended from long lines of pioneers who first came to America in the early 1600’s and helped found Manhattan, and whose western migration over the centuries reflect much of the history of this country. She attended a one-room school near the Danish Cemetery on High Pass Road and graduated from Monroe High School.Arlene met the love of her life, Brochner (Brooks) Mikkelsen at a Danish young people’s gathering. They married in 1939 and raised four children, Ron, Marj, Larry, and Nancy, while residing in Junction City on the farm at the end of Dane Lane where Brooks was born and raised. Farming both the Cox place east of Junction and the Mikkelsen farm west of Junction, Arlene was fully engaged with Brooks in farming, church and community activities, and raising their family. She worked in the fields, drove trucks and tractors, moved irrigation pipe, ran a bean yard, canned hundreds of jars of fruits and vegetables every summer, maintained a huge garden and yard, volunteered in the schools, taught Sunday School, led the church youth group for years, and played many important roles in the lives of their grandchildren. In retirement she and Brooks loved to travel, becoming Arizona snowbirds and OreLane Roamers. Brooks died in 1997. Arlene has recently resided at Mennonite Village in Albany, grateful for the wonderful care she received. After a short illness, Arlene died January 21, 2010.Arlene is survived by her four children (Ron and Larry Mikkelsen, Marj Enneking, and Nancy Hawkins) and 12 grandchildren (Terry, Cheryl, Greg, Dennis, and Kevin Mikkelsen; Jan Olsen; Ranee Woods; Nancy and Brian Enneking; and Mike, Jennifer, and Melissa Allen). She is also survived by 20 great grandchildren; 9 great-great grandchildren; and a large family of nieces, nephews and cousins, including her third cousin and Cox family historian, Francis Griffen.Following a private family burial, a memorial service for Arlene will be held Monday, January 25, 2010, at the Junction City Scandinavian Festival Hall, (7th and Greenwood) at 2:30 pm, to which all her family and friends are invited. Contributions in her honor may be made to the Brooks Mikkelsen and Arlene Cox Mikkelsen Endowment Fund of Junction City Education Together Foundation or a charity of your choice.